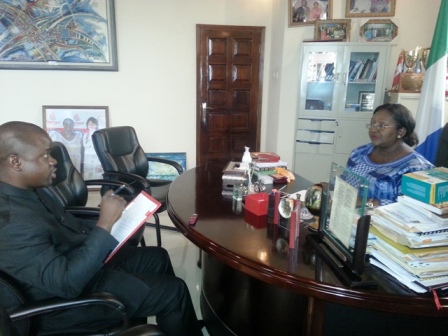 On a beautiful Wednesday afternoon, October 29th, I arrived at the Presidential Lodge, ninety minutes to the agreed time for the interview appointment (2pm).

“You arrived earlier than expected”, Madam Florence Sesay, a staff in the Office of the First lady and a former college/course mate, had told me. “Yes”, I said, “…it is better to be too early when interview appointments had been given, than told to come next time for being late”, I told her, and we joked over it.

Few minutes to the agreed time, the security detail, an unassuming young gentleman sturdy but appearing friendly, requested all electronic gadgets from me, in readiness to be ushered into the First Lady’s Office. I was then ‘escorted’ into the office, to meet the country’s First Mother.

A beaming smile on the face of Sia Nyama Koroma (Mrs.) a facsimile of his husband’s trade mark (ever smiling) captured my attention, coupled with her soft spoken “welcome, take a seat” words, added to her typical African attire, indicative, also of her love for Sierra Leone.

Madam Sia Nyama Koroma is First Lady of the Republic of Sierra Leone. With a solid background in the health sector as a Bio-Chemist and post graduate degree in Synthetic Organic Chemistry and at one point heading into Psychiatric Nursing, Madam Koroma sees it incumbent to support Government’s efforts in nation building and “a point of duty to complement Government in the health and education sectors”

With a desire to make an impact, by engaging Sierra Leoneans across the board, the Office of the First Lady has, in the last couple of years been working on women and children’s issues through a number of projects.

For instance, the Women Initiative for Safer Health (WASH) is designed to “improve women’s reproductive health outcomes” Objectives of the project include, but not limited to;

There also is the First Lady’s Attitudinal Change in School’s (FLAXIS) Project. It promotes child education and “examines the concept of attitudinal change in the overall behavior of young people in schools and has over the years been awarding scholarships to deserving students. Activities for this project include, introducing “pupil’s text books and teachers guides on Citizenship Education for Attitudinal and Behavioral Change…”

Madam Koroma underscored the importance of “capacity building for our children” as she believes, the capacity of professionals like nurses must be built whilst highlighting the need for more scholarship opportunities for the less privileged.

Also under her office is the Danke Koroma Foundation, which “works to promote the health, education, and empowerment of women and children”, with specific attention to marginalized and disadvantaged children.

In essence, the First Lady has been extremely busy in supporting the country’s development project particularly in the promotion of women and children’s issues.

Sierra Leone got attacked by an unexpected ‘enemy’ which continues to be a prevailing challenge, known as Ebola.

A rare severe disease that can be caught by direct body contact with blood and other body fluids from infected persons, the Ebola Virus Disease has accounted for the deaths of thousands of people in the Mano River Union countries of Guinea, Liberia and Sierra Leone and now also even developed countries now feel the effect of the virus, in terms of fear, stigma and infections. At the MRU level, the EVD has affected the economic viability of countries from the framework of their growth triangles as seen within the Makona River Basin.

Leaders in the aforementioned nations have, since the outbreak been working round the clock to get the virus under control. The International Community, though late, in some cases, came in robustly with all supports available. In Sierra Leone, for instance, the Chinese took a lead in providing supporting. The British and other development partners have also been on the ground helping.

The President, Dr Ernest Bai Koroma has so far demonstrated strong commitment in tackling the virus. This has been manifested in the number of visits he has paid to Ebola stricken towns, coupled with his on-the-spot monitoring mechanism, since the outbreak.

With such laudable initiatives the First Lady’s Office has been working on, and given the outbreak of the EVD, Madam Koroma told me, she was very much “concern” given the effect of the virus on women and children.

“The Virus has had a very devastating effect in Sierra Leone and the sub region. We have lost women and children as they have been dying and that has had an adverse effect on the country”

Ebola has taken a sub regional dimension. The need for regional approach to tackling the challenges brought, and to be left by the EVD cannot, therefore, be overstated. The First Lady points to the fact that women make up 52% of Sierra Leone’s population and “50-60% of EVD deaths are women”

At the regional level, Madam Koroma said, First Ladies have been working on First Ladies Initiative on Gender Dimension of Ebola Spread. This should help get a regional approach to integrate and harmonize countries’ approach to the virus especially in tackling the post Ebola challenges.

There also, are plans for Social Fund, to empower Ebola survivors, which is indicative of the commitment of First Ladies to see how Ebola survivors could be cared for. But “there is a lot to be done”, she acknowledged.

“I am grateful to our partners like MSF, WHO etc. Am happy the Cubans have arrived but the international response was slow. We need more support, we need more capacity and we need more money” Madam Koroma calls for more clinicians, more resource support amongst others.

She commended Government’s commitment, acknowledging, “The commitment is there on the part of Government”, though highlighting the challenges posed by “cultural practices that are slowing down the fight Against EVD but we are making progress”

Working with traditional and religious leaders could be productive. In the words of Madam First Lady, “Traditional leaders are doing their own part but I also think the problem lies with the people” pointing to the aspect of denial, ignorance and traditional values, customs and beliefs as having adversely impacted the fight against the virus. “Traditional beliefs, values and customs are a challenge too” she said.

Nurses, amongst other health professionals have continued to make a national sacrifice, since a number of them have lost their lives to the EVD. Madam Koroma recognized same, commending not just the Nurses but Doctors and other health works.

“I empathize with especially nurses given the circumstance they are working on” She, however cautioned, they should do their best in taking infection control seriously, as well as try to “protect themselves” Psychosocial counseling, she agreed, may play another important role especially as health workers are now faced with stigma and it is only when they are “in a good state of mind and be stable to work” that they will continue to give their best to the ongoing national fight.

Madam Koroma said, Ebola is not the making of the countries now affected. Nations have closed their borders, and in some, citizens from Ebola affected nations are been stigmatized and victimized. But for three, airlines that used to fly in and out of Sierra Leone had placed an embargo on the country.

This, the First lady said, has affected the efforts of countries to contain the Virus. “Do not victimize us as countries. Embargo by flights has even affected our efforts in containing the virus. International response was slow but victimization is totally unacceptable. This is not our own making and we therefore need all support”

She would want to leave a legacy; she told me and was emphatic in wanting to leave a “School of Excellence especially in the rural areas to narrow the gap between the rural people and the capitals”

I was left with a good impression about the First lady and her efforts towards national development over the years. She has not only been supportive of the president’s dream for a better Sierra Leone, she had taken the promotion of women and children’s issues as core of her daily routines. She, indeed, has added more value to what we have been doing as a country and which I would want to commend her. Thanks to all those who helped in facilitating this interview.

John Baimba Sesay is Sierra Leone’s Press Attaché to the People’s Republic of China. He is currently in Sierra Leone, his native homeland, on vacation. He has a passion for writing and reading, having a wealth of experience in Journalism and Media Relations.