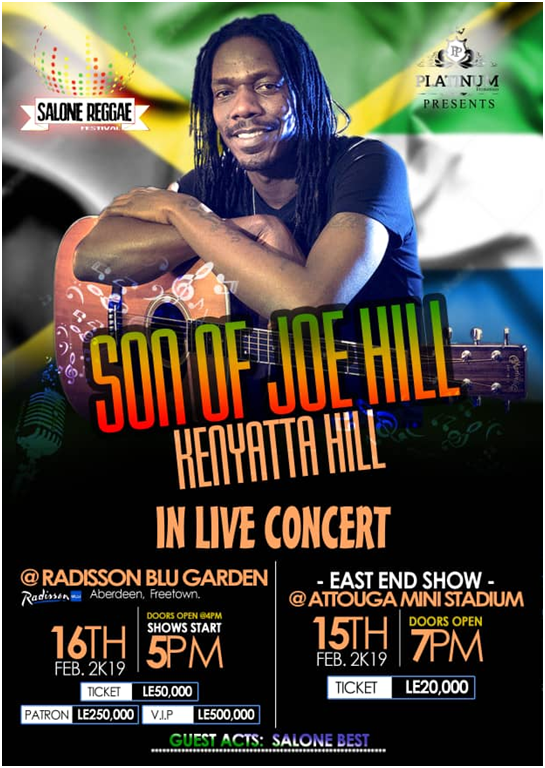 This medium has been reliably informed that Kenyatta Hill, the son of the late reggae international Superstar Joseph Hill, will arrive in Sierra Leone between 12th – 13th February to stage a live concert in the Salone Reggae Festival.

Speaking to Journalists in Freetown, the Chief Executive Officer (CEO) of Culture Radio 104.5 FM, Father Elijah Mohamed Issa Gegra said the concert will be organized by Culture Radio in collaboration with Platinum Promotion in England and Jamaica, headed by a Jamaican, Sandy Johnson at the Attouga Mini Stadium in the East on 15th and 16th February, 2019 at the Radisson Blu, Western part of the capital Freetown.

Father Gegra described Joe Hill’s Band as the second most popular in the world after Bob Marley, adding that during the war years, Joe Hill visited Sierra Leone on many occasions and his concerts were viewed as the best of their kinds because they attracted huge numbers of celebrities from across the country to listen to his inspirational message.

‘’Joe Hill is still popular the world over even after his death because of his legendary as a top reggae musical star in his days,’’ he told press men.  He confirmed that, the son of Joe Hill, Kenyatta Hill whose father died in 2006 will lead the band to Sierra Leone. He narrated that Joseph Hill was in a concert in Germany when he met his sudden demise but his relatives including Kenyatta Hills who were with him continue the tour in Berlin/Hamburg, Germany and beyond as if nothing happen. In fact, that is the reason we developed interest to have Kenyatta Hill here.

‘’We want to promote our own indigenous reggae music as that of Jamaican,’’ he told Journalists and stated that reggae music is international but it can be localized typically for it to have Sierra Leonean reggae source.

He said although they are pushing forward out of commitment and volunteerism but they are still looking out for sponsorship.

Mr. Gegra said, after the show on the 16th December, 2019 they would find ways and means to promote Sierra Leone cultural music.

He concluded by calling on Sierra Leoneans to come out on the stipulated days in numbers to listen to conscious vibes from late son of World Superstar, Kenyatta Hill.