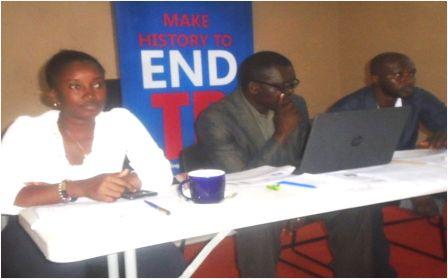 That Historic event was held at the Africell American Corner at Bathurst Street, via Siaka Stevens Street in Freetown on the 20th September 2018 with a host of various  Community  Based Organizations (CBOs) ,Civil Society Organizations (CSOs) ,Legal Experts, Faith Based Organizations (FBOs), TB Volunteers ,government representatives ,Journalists among other legitimate people .

Given an Overview of the Scoring Matrix, the Executive Director of CISMAT-SL, Abdulai A.Sesay said CISMAT-SL is an umbrella of Civil Society Organizations across Sierra Leone including Community Based and Faith Based Organizations working on TB programmes and policies.

He said the Objectives and Commitment of CISMAT-SL is to advocate for increased government supports, International Donor Partners  and other stakeholders on their commitment to TB and investment in the early diagnosis, prevention, care and treatment of TB and HIV/AIDS, maternal and newborn mortality & morbidity in Sierra Leone.

He said, according to the  World Health Organization (WHO) ,over 20,000 people are affected  yearly across the country  and that Sierra Leone has  highlighted 16,000 affected cases out of 20,000 with over 3,000 people missing for test and diagnosis. He said, very soon there will be TB Assessment Tests globally where people can discuss TB Stigma.

He said, if this stigma is not properly addressed with the necessary political will, the disease will continue to cause negative impact to the people as to whether to go for traditional treatment instead of accessing TB facility.” TB is one of the illnesses that is fast tracking the spread or increase of HIV/AIDS with the common symptom of continuous coughing.” Expressed by Mr. Sesay.

Mr. Sesay noted that CISMAT-SL was established few years back with a national focus to promote TB awareness nothing that CISMAT –SL is a Civil Society Coalition of diverse organizations ranging from CBOs and FBOs working on the promotion of civil society involvement in TB issues with the bid to strengthen advocacy efforts for the prevention, early diagnosis and treatment of TB, realizing the fact that TB is a health and a human rights issue.

Speaking about the Links to the health workforce crisis, Mr. Sesay said CISMAT-SL has been engaging government, including policy makers in the promotion of health work force in Sierra Leone through Seminars, Symposium and national consultative meetings and processes, taking into cognizance that the healthcare  system in Sierra Leone was characterized by poor infrastructure ,lack of appropriate qualified healthcare workers and insufficient supply of drugs, consumables and equipments that are related to TB  adding that even the hospitals in the city of Freetown often lack running water ,electricity and other basic necessities .He Said these problems are exacerbated by poor co-ordination, management and oversight of the healthcare system.

The Executive Director continued that, CISMAT-SL is already working with Parliament to form the Sierra Leone’s Parliamentary Caucus  on TB and that the political declaration talks more on TB advocacy for this year’s UN General Assembly for politicians to make national commitment on ending TB by 2030.

Presenting the recommendations on the country matrix, the Chairman Board of Trustees, CISMAT-SL, Pastor Paul Brima Bangura explained the outcome of Assessment Team discussion on the country’s current laws/policies, past court cases /policy enforcements and corresponding media coverage in relation to protecting individuals against TB-related.

Pastor Bangura updated participants that CISMAT-SL has arranged and transformed the existence of laws, litigation for Rulings and media coverage of court Rulings.

He appealed to participants to inform and educate others on the importance of formulating laws and policies to address and end TB stigma by 2030.

MP Calls For Decriminalization Of...