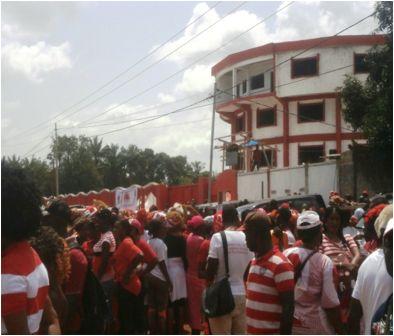 There was heavy downpour in Makeni last Sunday after the Leader and Chairman; His Excellency President Dr. Ernest Bai Koroma had pronounced Dr. Samura Kamara as the winner of the long time Presidential Flagbearer battle in the All Peoples Congress (APC) party.Â  (Photo: APC party office in Makeni where Dr. Samura Kamara was given the power)

The rain was heavy in a way that nobody was able to celebrate but standing in verandas.Â  Many described the heavy rain that poured down immediately after the announcement of the two giants as a repetition of history in our country.

It could be recalled that there was also heavy down pour in Freetown after the then Chief Commissioner and Returning Officer, Dr. Christiana Thorpe pronounced President Koroma as winner of the 2007 election.

In that regard, many have proposed that the rain was a shower of blessing that signifying victory for Dr. Samura Kamara in the 2018 Presidential election against the former Junta Leader in the main opposition Sierra Leone Peoples Party (SLPP), Retired Brigadier Julius Maada Bio.

Although many were expecting President Koroma and the entire APC leadership to have selected one of the famous aspirants while others describe the choice as a wise decision taken by the President for the fact that the two men (Dr. Samura Kamara and Hon. Chernor Bah) have clean records with no criminal indictment ever in their life time. In fact that is the reason supporters of the ruling party have vowed to vote for him because he is a virgin.

One thing about the APC supporters is that they are always willing and ready to demonstrate respect and love for President Koroma which they have done again by accepting his choice.

The campaign slogan of the APC has moved from â€˜444â€™ to â€˜Tolongboâ€™ which means in Themne straight line to clinch the Presidency and match to State House. Blessing Dr. Samura Kamara, May God almighty guides you in your encounter to become the next President of this great Republic of Sierra Leone.