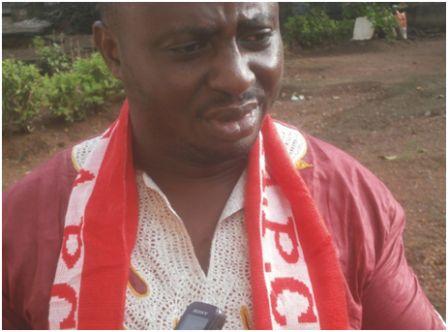 For failing to initiate development in Constituency 121 formerly constituency 103 since her (Honorable JK Smith) tenure of office, constituents are now calling on a son of the soil, Abdul Aziz Sahid Kamara (in photo) to represent them in Parliament come 2018 election under the APC party so that abject poverty that is seriously hitting community people will be reduced.

The most disheartening part of the story according to the disappointed electorates, Hon. JK Smith is not a daughter of the soil because they claimed that she is not living among them but rather went to live in the west part of Freetown.

They pointed out  that they are going to rally behind a season administrator, Abdul Aziz Sahid Kamara this time round because they alleged that their past Members of Parliament and the current MP, JK Smith abandoned them but Kamara who have lived in America since 2008 never abandon them to live in different environment. They therefore are calling on the Leader and Chairman of the APC, President Koroma, the Deputy Chairman and Leader, Minkailu Mansaray and the National Secretary General, Dr. Osman Foday Yansaneh to see reason why they should award symbol to more competent Sierra Leoneans that have the country at heart.

Speaking to this medium, the hopeful Parliamentary aspirant, Abdul Aziz Sahid Kamara said he is an indigene who is always living among his people even before he travelled to the United States of America (USA) in 2008 and he emphasized that Blakhall and the entire Coconut Farm communities are still deprived with lack of basic facilities especially health center which has been resulted to the untimely death of many people.

He pointed out that the deplorable road network system remains the same and there is still issue of water crisis and he expressed sympathy to young girls who woke up around 2-3 at nigh to fetch water, a process he attributed to have caused many teenageÂ  pregnancy as a result of bad leadership and weak advocacy method.

He explained that in 1997, he sustained serious injury in his right hand in the process of saving lives of his people from the hands of rebel fighters and mentioned that they formed groups and mounted checkpoints to search and get rid of rebel fighters out of the community. He said as a result of the injury he sustained, he was hospitalized close to a year. Kamara also talked about the high number of young people he used to organize to keep the entire Blackhall Road community clean and disease free.

He said, he has also empowered over fifty war affected women who have now become self-reliance as many are now doing professional tailoring and gara tie dying to sustain themselves and family members. He said the playing field which is also used by Muslims to organize festive prayers named ‘Aziz Stadium’ which he said is a sign of commitment to area development. “I donated bags of rice and other food condiment and carpets to various Mosques during Ramadan months every year”, said the hopeful Parliamentary aspirant. He lamented that work is in progress to construct a bridge at Coconut Farm which serve as one of the main routes in the community.

He also revealed plan to build casket so that community people will find it easy to bury their loved ones.

However, Kamara has assured supporters that even if the symbol is not given to him he would continue with his humanitarian work because he bragged that he wanted to turn the entire community to Paradise if giving the opportunity to represent his people.

He said he has established and registered a Non-Governmental Organization known as Abdul Aziz Foundation in America adding that he is currently working on project to help relief deprived Sierra Leoneans. He encouraged constituents to follow him so that he can remove them from their untold suffering and push the community development programs forward. He called on Sierra Leoneans to give scholarship to school pupils and empower women through micro finance scheme.