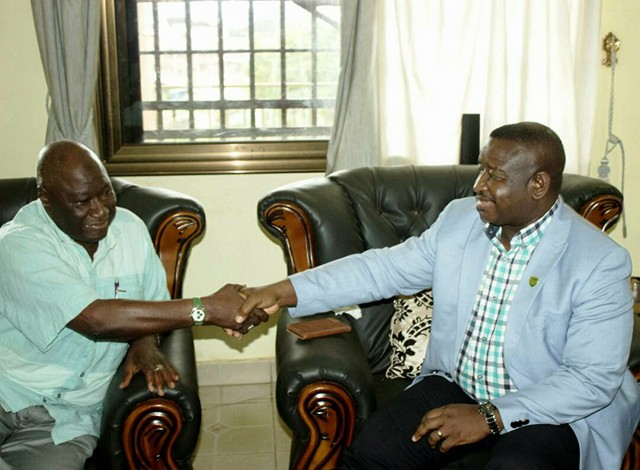 During his acceptance speech on Sunday 15th October 2017, Retired Brigadier Julius Maada Bio showed magnanimity in appealing to all former colleague aspirants and their supporters to come together in peace and unity and join him to take the SLPP to State House.

As a demonstration of that magnanimity and to continue in uniting the SLPP, on Tuesday 17th October 2017, the Presidential Candidate of the SLPP paid courtesy calls to all former flag bearer aspirants in their respective residences to invite them to join him to return the Party to governance.

At the residence of Engineer Munda Rogers, Rtd. Brigadier Julius Maada Bio said that he was at the home of the Engineer because of the Spirit of One Country, One People. He said the Party went through a political struggle but after the election as flag bearer he wanted everyone to work together. Bio also appealed to Engineer Munda Rogers that if anyone had insulted or molested him during the flag bearer campaign he was sorry.

In response, Engineer Rogers welcomed Bio and thanked him for the initiative to reach out to all former aspirants. He assured Bio that he has only known SLPP and will always be SLPP. Rogers appealed to the SLPP flag bearer that his excellent reconciliation drive should also go down to the grassroots level so that everyone will follow the good example. In attendance on behalf of the Munda Rogers Campaign Team were his wife, Hon A. Massaquoi and others.

After the visit to Engineer Munda Rogers, Bio and entourage also visited the residence of Ambassador Umaru B. Wurie. At Wurieâ€™s residence, the SLPP flag bearer described Ambassador Wurie as his brother who he has had a good working relationship with for many years. Bio told Ambassador Wurie that the flag bearer contest is now over and he is inviting him to join the march to state house.

On his part, Ambassador Wurie said that the election of Bio was not in doubt but that he wanted to show that the convention was not a coronation and that a Northerner is represented among the poll of aspirants to show SLPP is One Country, One People. Wurie told Bio that SLPP is his home and accepted the invitation from Bio to work with him for the victory of the SLPP. Also receiving the Bio entourage was his wife, Mrs. Wurie.

From Ambassador Wurie, Bio also visited Dr Alie Kabba at his residence where he told him that his election is the beginning of the road to develop the country. Bio commended Alie Kabba for his spirited campaign and stated he is a valued member of the Party. The SLPP Flag bearer aspirant assured Kabba that he will be part of the process to return SLPP to governance.

Excited about the visit, Alie Kabba described the visit by Bio that it is a visit by a brother to another brother. Kabba said that the proudest moment for him will be to see a brother with the opportunity to lead our Party to State House. Kabba said that he was proud of the manner Bio carried himself throughout the campaign. He said that the Party should have a campaign for first rounds. Kabba also committed himself that he will do everything possible to ensure that Bio becomes the next President. Kabba told Bio that it will be a great honour to work with him.

The final visit was to the residence of the former Chairman and Leader, Mr John O. Benjamin. At his house, Rtd. Brigadier Bio referred to Mr Benjamin as his brother and that he has known the family for over two decades. In the spirit of unity, Bio stated that in politics no one group will succeed without the contributions of everyone. Bio told Benjamin that he is a special person in the party and that what happened during the campaign period should be put behind us. The SLPP flag bearer also stated that his move to unite the Party is because of the country adding that the worst SLPP Government is better than APC at its best.

On his part, Mr Benjamin expressed his appreciation for the meeting stating that he is not in SLPP to run away. Benjamin said that the focal point should now be how we can transform the flagbearship into the Presidency. He said that we have to put behind us what happened in the flagbearer campaign and encourage everyone to come on board. The former flagbearer aspirant also appealed that we should not dismiss anyone. In a very determined tone, Benjamin stated that this time the SLPP should not take APC to court but that APC should take SLPP to court because SLPP must win the elections. In attendance at the meeting senior members of Team JOB including Dr John Karimu, Lawyer Shangari and others also made contributions calling for sincerity from all sides.

Animators Capacitated On The Pay N...