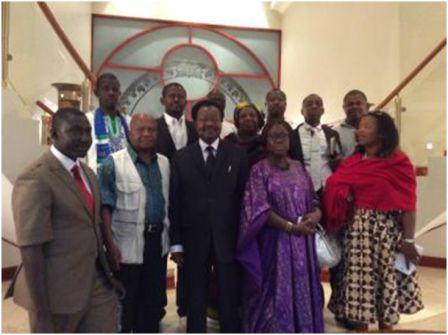 South Africa, May 7 (SLENA) -Vice President, Dr. Victor Bockarie Foh on Monday 2nd May 2016 admonished a cross section of Sierra Leoneans living in south Africa and Botswana, respectively, to live in unity, be law abiding, to always love their country and to put her interest above all else.  (Photo: VP Foh (3rd from left) Minority Leader, Hon. Bernadette Lahai (2nd from right)

He expressed the President’s felicitations to them all and apologizes for his absence as he, the President Dr. Ernest Bai Koroma was attending to other imperative state functions at home.

He made this statement at a meeting with Sierra Leoneans in Midrand, Johannesburg, South Africa.

The Vice President went on to entreat them to walk in a manner that is worthy of humility and gentleness, patience, showing tolerance to one another in love and to be diligent to defend the unity of the country in the bond of peace.

He further implored them to live in a stress-free state of security and calmness and ensure that everything coexists in perfect harmony and freedom.

Addressing their concerns raised earlier, Vice President Dr. Foh assured them that the absence of an embassy in South Africa will soon be to rest as the Ministry of Foreign Affairs is currently working on that. He said His Excellency, Dr. Ernest Bai Koroma is a development oriented leader who always cares for his people both home and abroad.

The Vice President, on behalf of His Excellency, Dr. Ernest Bai Koroma, guaranteed them of government’s support in addressing their anxieties.

He concluded by lauding them for their efforts in raising the country’s flag higher in their respective countries of residence, and for keeping themselves from all forms of violence and criminal activities.

Presenting the position paper of the Community of Sierra Leoneans in South Africa (COSASA) to the Hon. Vice President, Dr. Sheku Alfred Kanu, a member of COSASA highlighted and stressed that the absence of an embassy in the Southern region of Africa is a cause for concern. He emphasized that they Sierra Leoneans living in that region are faced with serious challenges in accessing basic embassy services such as the renewal of passports, obtaining and/or renewing of driver’s licenses, getting attestation letters, birth and marriage certificates and the intervention in situations where the service of an embassy is required.

Dr. Kanu noted that in 2014 when a Sierra Leonean was gunned down in Johannesburg, an embassy was expected to confirm the nationality of the deceased but to no avail. He said their brothers and sisters are being wrongfully arrested and illegally detained in Lindela for documentations that an embassy could have provided.

He added that Sierra Leoneans studying in the region are also crying for help especially in the area of renewing or extending their study permits.

The absence of an embassy, he reiterated, is a serious concern for them and even those intended to travel to South Africa as they are faced with rigid visa requirements.

He stated the importance of an embassy in South Africa which he said, will not only go a long way in assuaging their existing challenges but will also strengthen and endorse the diplomatic relations between the two sister African countries.

He encouraged the government to address the issue of an embassy in South Africa, Botswana, Swaziland and Lesotho. He called on the Hon. Vice President and Sierra Leone Members of Parliament in the Pan-African Parliament to convey their concerns to the President, Dr. Ernest Bai Koroma and the APC government.

Dr. Kanu outlined some of their development strides undertaken by COSASA especially in the fight to end the Ebola scourge in Sierra Leone, which among them he said was the donation to MSF, a thank you match to the Union Building to thank the South African government in the fight to rid the scourge, amongst others.

He thanked His Excellency and his government for their incredible efforts in putting a stop to the spread of Ebola in the country.