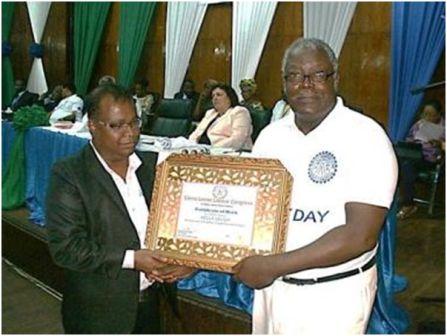 The award was bestowed on the company during the maiden World Labour Day commemoration at the Miatta Conference, a ceremony witnessed by President Koroma, Diplomats, Trade Unions and the Media.

According to the citation of the award Milla Group Sierra Leone limited at 2 Fisher Lane Kissy has created more jobs for the people within their operational area than other companies.

The company the citation added has also promoted Sierra Leoneans to top positions within the company.

Milla Group is also on record for promoting the welfare of workers and protecting their rights the citation read.

Handing over the award the acting President of the Sierra Leone Labour Congress Jennings Wright applauded Milla Group for protecting the right of workers and also seeking their welfare.

He said Milla Group is one of the local companies that are contributing greatly towards job creation for the youths and also promoting them to top positions.

He also commended the company for implementing International accepted labour standards for their workers.

Receiving the award on behalf of Milla Group Sierra Leone limited the General Manager Sony Ramakrishnan expressed profound thanks and appreciation to the Sierra Leone Labour Congress for recognizing the company with an award of certificate.

He said Milla Group remains committed and determined to create more jobs for competent youths especially that are resident within the community they operate. He added that staff welfare is a top most priority of the company.

He also said that Milla Group ensures that workers right are protected and they are usually promoted to top positions.

He said expatriates can also train local staff in different fields of operations with the objective to share knowledge and experience for improved productivity.

He assured that Milla Group Sierra Leone Limited will continue to provide jobs for locals with an improved welfare.

Earlier, Milla Group also took their local and expatriate staff to No 2 River for an outing where they played games, dined and danced together to the satisfaction of their staff.

Staff of Milla Group in an interview commended the dynamic and development oriented General Manger Sony Ramakrishnan for his efforts in seeking the welfare of workers at the company.

The General Manager was also praised for his contribution towards the promotion of staff and also addressing their needs.