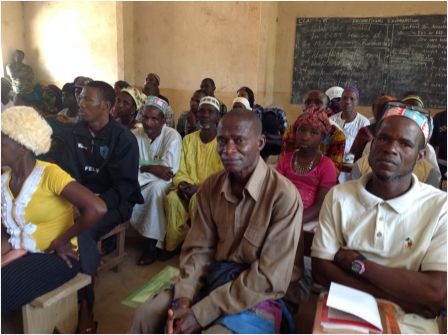 Introduction:  FOCUS 1000 team left Freetown last Sunday via Kabala to Krubonla in order to sensitize the religious leaders there on Ebola. The road to the town is not only bad but is 300 miles away from Freetown.  The fueled vehicle provided by FOCUS 1000 could not make the journey to Krubonla owing to bad road networks that have existed for the past 50 years or so.  (Photo: Participants in Krubonla 24/3/15)

As we arrived our driver and the vehicle were replaced with that of the District Ebola Response Centre’s by the District coordinator Dr. Fasineh Samura.   We went to Krubonla easily with their Toyota land cruiser.

The participants were in full attendance and they were happy that they have heard Ebola related quotations from both the Bible and Quran for the first time through Focus 1000.

According to them they are still Ebola free but their main problem now is lack of a burial team. The situation is making villagers to flee their localities because of decomposed corpses all over the place as a result of too much delay in burial exercises as a result.  They confirmed to this reporter that bodies take five to six days awaiting the team to come from Mongo which is 35 miles away.  They are asking the government to help them have their own team so that they can put the situation under control.

The Christian Action Group  (CHRISTAG) and Islamic Action Group (ISLAG) are combined religious groups sponsored by Focus 1000 to join the fight against Ebola.

These are observations made by the people during the chiefdom’s training workshop of religious leaders in Krubonla in Neya chiefdom, Koinadugu district.

The burial team assigned to that part of the district is not a enough to cover the community properly.

As I write this story there are  4 different dead bodies in places like  Porpon, Bumbukoro , Mambruyah and Kongowakoro dead and unburied for the past five days now and they are still there.  These bodies have already decomposed and the inhabitants have fled the scene.

According to them, the burial team has to walk on foot a distance of ten, fifteen to 20 miles to bury bodies as the roads are not motorable.

The burial team trained earlier to serve in the community was not mandated to perform and therefore has no representation of their community, even though they had been trained by the authorities of DERC in Kabala.

In order to reduce the current embracing situation they suggested the following:

(1) Let each section in the chiefdom have their own burial team to quickly have access to the dead bodies in time.

(2) They know they cannot touch dead bodies any more, but for their safety, want to see them buried within 24 hours as stipulated by NERC.

(3) They prefer their chiefdom people to be trained so that they can bury their love ones with dignity.