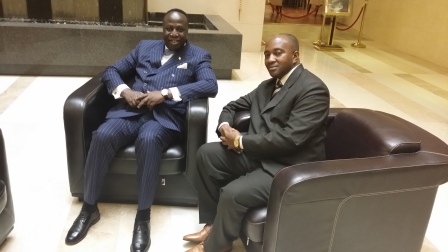 Gambia’s newly re-appointed Minister of Foreign Affairs has hailed the cordial ties between his country and Sierra Leone, saying both countries have had strong bond and relations since the colonial era. (Photo: Gambia’s Foreign Minister (Left) after an interview with Sierra Leone Press Attaché  in Iran)

Hon. Bala Garba Jahumpa made this remark in an interview with Sierra Leone’s Press Attaché to the Kingdom of Saudi Arabia on the sideline of the just concluded 10th Session of the Islamic Conference of Information Ministers (ICIM) hosted at the Parsian Gulf International Hotel in Tehran, the Islamic Republic of Iran.

The diplomat who is also overseeing the Information and Communications Ministry said: “Our cordial relations have existed since the colonial time. We have also been sharing governors during the colonial era and have many things in common.”

The Foreign Minister paid a special tribute to Sierra Leone’s President Ernest Bai Koroma for “his remarkable and dynamic leadership” which he said, has further helped to promote the ties of friendship and co-operation between the two sister countries.

Gambia and Sierra Leone, the top Gambian diplomat pointed out, have witnessed tremendous progress in their bilateral relations under President Yayah Jammeh and his brother and counterpart, President Ernest Koroma.

On the Ebola Virus Disease that is ravaging Sierra Leone and its immediate neighbours, the Minister expressed sympathy and solicitude for massive human and economic losses caused by the Ebola outbreak in the three most affected West African countries.

He also called on the international community to increase its efforts and provide additional assistance to the nations affected by the disease, so that that they can overcome the epidemic and restore a normal life as early as possible.

It could be recalled that President Yahya Jammeh, “in a show of African solidarity”, donated US$500,000 to the people of Sierra Leone as Gambia’s contribution towards the fight against Ebola in August this year.

Jahumpa has served twice as Minister of Foreign Affairs and twice as the Minister of Finance and Economic Affairs in the Yayah Jammeh led – Alliance for Patriotic Reorientation and Construction (AFRC) Government.

Sacrificial Efforts in Fighting a...