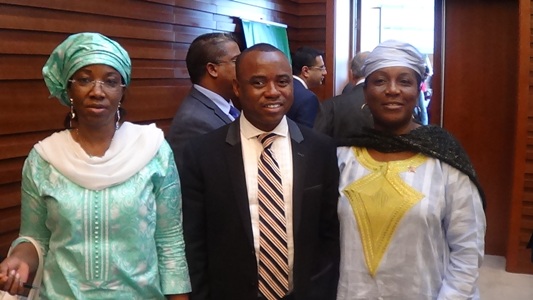 Sierra Leone’s Ambassador to the Federal Democratic Republic of Ethiopia and Permanent Representative to the African Union Commission today (Saturday 8th November, 2014) called on the African business community to collaborate with the African Union Commission in calling on Member States of the Union to end their protectionist policies of isolating and stigmatizing Ebola affected countries and their respective citizens. From (L to R) The Guinean Envoy, Ambassador Kamara and the Liberian Emissary

His Excellency Mr. Osman Keh Kamara stated that the ongoing border closures and flight bans imposed on Ebola affected countries contravene the recent African Union Executive Council Decision adopted on 8th September 2014. He implored the business entrepreneurs to utilize the available tools in their possession to exert pressure on their respective Governments.

He made the statement during a Business Roundtable Forum on Ebola, organized by the African Union Commission (AUC), the United Nations Economic Commission for Africa (UNECA) and the African Development Bank (AfDB) to raise funds for the deployment of 1,000 health workers in the three affected countries (Guinea, Liberia and Sierra Leone). The forum was attended by numerous African business leaders in Addis Ababa, Ethiopia.

He said among other things that “Ebola is real, Ebola can extinct humanity within seconds to 21days. The right to life is inalienable. If an epidemic like the Ebola virus disease threatened the sanctity of life, it is the collective responsibility of the global community including private business sectors to intervene in a prompt and coordinated manner to contain, eradicate and prevent its resurgence in the future”.

He also reechoed the call for the holding of an international global conference on Ebola to be organized by the AUC, in collaboration with the UNECA, other international organizations and partners in order to discuss and adopt a standard framework document for coordinated international response to the Ebola virus disease and similar future health emergencies. This proposal has already been adopted as a decision of the African Union Permanent Representatives’ Committee as well as the AUC’s Peace and Security Council.

Dlamini-Zuma and the Executive Secretary of the UNECA, Dr. Carlos Lopez for their recent solidarity visits to Sierra Leone and constructive engagements with His Excellency Dr. Ernest Bai Koroma, President of the Republic of Sierra Leone. The Ambassadors of Liberia and Guinea also made statements at the event.

In her opening statement, the Commission’s Chairperson, Dr. Nkosazana

Dlamini-Zuma described Ebola as a continental and global challenge and therefore humanity must be equal to this challenge.

Others speakers at the roundtable forum were the Executive Secretary of the UNECA, Dr. Carlos Lopez and the President of the AfDB, Dr. Donald Kaberuka.

Meanwhile, out of the USD 30 million projected to be raised by the Commission, the business leaders were able to pledge over USD 20 million to the African Union to combat Ebola in the sub region whilst other business organizations promised to make their pledges after receiving approval from their respective Board of Directors. Other business groups pledged logistical supports such as air lighting of health personnel to the affected countries etc. The Tony Elumelu Foundation based in Nigeria donated USD 300,000 to each of the affected countries and USD 100,000 to the Commission.

Biofortification offers hope for A...