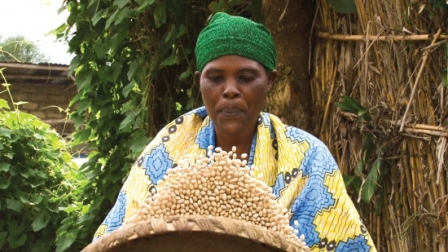 Many people who live in Lira district in northern Uganda consider Perpetua Okao a farmer and a life saver—and it is easy to know why. Her neighbour’s son was malnourished and often sickly. But after feeding him a diet of vitamin A-rich orange-fleshed sweet potato, the boy’s health improved dramatically in just a few days. Ms. Okao is among some 126,000 Ugandan farmers growing the orange-fleshed sweet potato, a new variety of potato enriched with vitamin A through biofortification.  (Photo: A woman harvests high iron beans in Northern Province, Rwanda. Photo: HarvestPlus/Angoor Studios)

Biofortification is a process by which crops are bred in a way that increases their nutritional value. The idea behind biofortification is to breed nutritious plants, a process which experts consider much cheaper than adding micronutrients to already processed foods. It is a smart method to fight malnutrition, say agriculturists and nutritionists. The Food and Agriculture Organization (FAO), a UN food agency, considers malnutrition—caused by a lack of essential micronutrients such as iodine, iron, zinc and vitamin A in diets—a threat to millions of African lives.

Biofortification can mitigate the effects of vitamin A deficiency (VAD) in people, reports HarvestPlus, a research centre committed to fighting global hunger. Microsoft co-founder and philanthropist Bill Gates provides financial support to HarvestPlus. The organization further notes that VAD is a serious health problem in more than 90 countries but more acutely in Africa and Asia. The deficiency causes preventable blindness in children and increases the risk of disease and death from severe infections. It also causes night blindness in women and increases the risk of maternal mortality.

In Africa, HarvestPlus estimates that 42% of children under the age of five and women between 15 and 49 years of age suffer from VAD. Uganda, which is severely affected, is now extensively producing the orange-fleshed sweet potato variety rich in beta-carotene, an organic compound that converts to vitamin A in the human body.

But malnutrition is not just a Ugandan problem; it is widespread in Africa, says the FAO. The agency estimates that 30% of Africa’s children are malnourished and stunted, have reduced learning and earning potential and are vulnerable to infections and early death.

The quest for more nutritious foods for Africans was the subject of a three-day conference on biofortification last April in Kigali, Rwanda. At that conference, more than 275 top government, business and civil society leaders discussed ways to start a continent-wide adoption of biofortification.

Like Nigeria, Zambia has introduced pro-vitamin A cassava and maize. In Rwanda, about half a million farmers are growing new varieties of beans rich in iron. Farmers using these varieties are harvesting more yields per hectare and earning more income selling the surplus. Martha Birungi, a farmer in Rwanda’s eastern district, is currently growing nutritious and high-yield iron-rich beans and earning higher income than before.

“The new varieties of beans are big in size and when you cook them they expand and are very delicious. They have higher iron content when compared to the indigenous ones we were used to,” says Birungi. She added that the enriched-iron beans provide more than three tonnes per hectare compared to less than a tonne from indigenous bean varieties.

HarvestPlus and partners plan to develop more varieties of crops that will provide adequate vitamin A, zinc or iron to more than two billion people worldwide. “We’re just beginning to scratch the surface…We want to increase access to these nutritious crops as quickly as possible,” says Howarth Bouis, director of HarvestPlus, adding: “I think we have had unequivocal success in Africa with the orange flesh sweet potato.” Yassir Islam, the organization’s spokesperson, told Africa Renewal in an interview that they have scaled up their interventions in about 15 African countries, including in the Democratic Republic of the Congo (DRC), Kenya, Mozambique, Rwanda, Uganda and Zambia with most of the work carried out by the International Potato Centre, a Peru-based research centre.

Mr. Islam says that Rwanda was the first target country because beans are one of its most important staple foods. HarvestPlus moved on to Uganda and the eastern DRC, even as they plan further interventions in more African countries. The World Food Programme (WFP), a UN food relief agency, has noticed the success stories in the malnutrition fight in Uganda, the DRC and Rwanda. The WFP now buys more than one billion dollars worth of food each year from developing countries, and currently has 77 tonnes of iron-fortified beans for its food support programmes, according to Ken Davies, WFP’s global coordinator.

“The potential for introducing micronutrient and biofortified foods into the WFP’s food basket is immense because smallholder farmers in many countries are challenged by micronutrient deficiencies,” notes Mr. Davies, who added that there was still a long way to go in the fight against malnutrition.

Jeff Waage, technical advisor at the Global Panel on Agriculture and Food Systems, an expert group tackling challenges in food and nutrition security, says that the benefits of biofortification in crops are obvious. What remains is unlocking the potential for biofortification to engender better agriculture and food policies that promote nutrition. World Bank’s vice president Rachel Kyte concurs and highlights the bank’s commitment to boosting production of biofortified crops. Biofortification, Ms. Kyte says, provides a pathway to nutritional security for Africa’s food system. She says that scientific research on the possibilities of biofortification is no longer up for debate; it is an accepted reality.

Concerned about malnutrition rates in the region, African policy makers and foreign partners are beginning to appreciate the value of the science behind biofortification, says Robin Buruchara, the regional director for Africa at the International Centre for Tropical Agriculture, which works with 30 countries in East and Southern Africa. “We are flipping the conversation from: ‘is it is possible, can we do it, is it safe, do we get greater yield? to ‘how do we get this into the bowl and hands of children across the continent in Africa.’”

With increasing foreign direct investment flows in Africa and a growing gross domestic product driven in part by a mining boom and agricultural growth, filling empty stomachs in Africa is urgent, experts say. Biofortification is an area in which Africa is taking the lead. “This [biofortification] is one of the greatest innovations in the world and it is being driven by Africans from Africa and it will be Africa in the forefront,” Ms. Kyte told Africa Renewal. “This is not Africa following the rest of the world, this is Africa saying we are going first.”

New WHO “Safe and Dignified Burial...