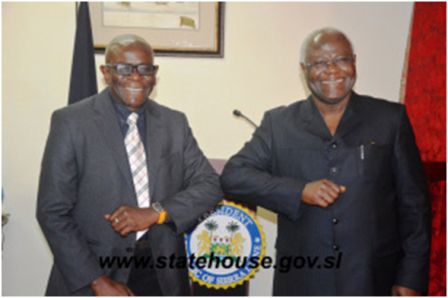 President Ernest Bai Koroma on Thursday 16th October received the Crisis Manager of the United Nation’s Mission on Ebola Emergency Response (UNMEER) Mr. Amadu Kamara at State House. It could be recalled that Mr. Anthony Banbury, Special Representative and Head of UNMEER was also in the country recently to apprise the president of the first ever UN emergency health mission being set up in response to the unprecedented outbreak of the Ebola virus disease (EVD).

President Koroma implored the U.N. envoy that he was coming in at a very difficult time with challenging assignments. He stated that the Ebola outbreak has particularly affected countries in the Mano River Basin and it has been a global issue as well. He further expressed gratitude that the United Nations is in the country to give support to government’s efforts and effectively collaborate to contain the situation. He wasted no time to state that this is no time for too much bureaucracy whilst pointing out that government was committed to put in place structures and where possible redesign the structures to enhance effective implementation of the decisions made. “My government is very open to work together, and we will ensure the political will to work collaboratively,” he noted.

President Koroma recalled the visit of the United Nations Secretary General Ban Ki Moon and quoted the UN Chief saying that Sierra Leone was the fastest growing post war recovery country. The president said, “It happened because we collaborated effectively with the UN,” and entreated Mr. Kamara to use his experience in his assignment to help contain the situation.

The newly appointed Sierra Leonean born Crisis Manager of UNMEER operations in the country, Mr. Amadu Kamara, said he was humble to serve in the position especially so when he is a son of the soil. He pledged his fullest commitment and dedicated service to support the government for a speedy halt of the epidemic.

16th anniversary of the death of M...