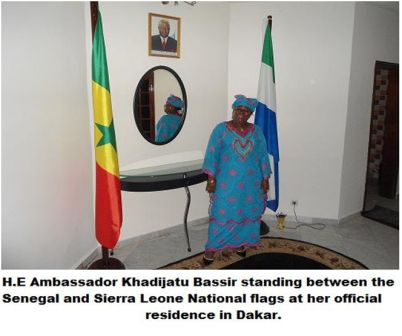 A consignment of medical drugs, equipment and Doctors from the State of Israel is expected to arrive soon in Sierra Leone as part of the Government of Israel’s contribution in helping to fight the deadly Ebola virus outbreak.

This was disclosed to Sierra Leone’s Ambassador to Senegal H.E Ambassador Khadijatu Bassir (in photo) by the Israeli Ambassador in Senegal.

Following, Government’s appeal to the International Community for financial and other logistical support in the fight against the outbreak of the Ebola virus, the Government of the State of Israel was approached by Ambassador Khadijatu Bassir through its Ambassador in Dakar Senegal for the donation of drugs and other medical equipments.

After the meeting between the two Ambassadors that was described as fruitful, a list of required medical items for the treatment of the disease was requested by the Israeli Ambassador and urgently forwarded to Israel for his Government’s attention and action. Among what Ambassador Bassir told her counterpart was that ‘The deadly Ebola virus is no part of us and therefore it must go and be eradicated by all means possible’

The authorities in Israel has now through its Ambassador in Senegal reliably informed the Sierra Leone Mission in Senegal, that a consignment of medical drugs and Doctors are expected to land in Freetown shortly to help in the fight against the Ebola virus that has become an alarming International emergency.

Can Africa move away from aid to t...