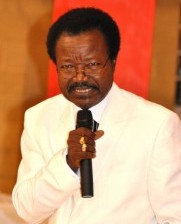 Sierra Leone’s new envoy to the People’s Republic of China, Victor Bockarie Foh has assured, that with his appointment to China, more efforts will be put towards further strengthening the already existing relationship between the two countries by exploring opportunities that will capture areas dealing with culture, women and children and bridging a greater link between the embassy and Sierra Leoneans across the Asian continent, especially in the countries he is accredited to.  (Photo: Victor Foh)

He spoke on Friday 19th April,  during a telephone interview with this writer, following his approval by Sierra Leone’s House of Parliament as the country’s  new Ambassador Extra-ordinary and Plenipotentiary to the People’s Republic of China, succeeding Ambassador Abubakarr Multi-Kamara who going  to the United Nations.

According to Ambassador Foh, his appointment as Ambassador by President Koroma is an indication of the country’s commitment to fostering the already existing relationship with China, especially at the political level, saying, “the two countries are now cementing the long standing relationship that has been in existence for years and which was started by late Chairman Mao Zedong of China and President Siaka Stevens of Sierra Leone”. He was optimistic, of working all within his reach, to ensure, “we strengthen not just the diplomatic relations, but work towards sustaining the political relations, given what used to happen” He said, being the first party secretary to be sent  as Ambassador to China, he will work hard to reawaken the political diplomacy between the two states.

Speaking further on plans, Ambassador Foh said, there is also the desire on his part to see how the Sierra Leone’s culture could be exposed, given that “China has a rich culture just like Sierra Leone although ours is undeveloped. I believe my presence in China as Ambassador is not just to ensure infrastructural development, which has been very commendable, but we will also work towards extending the cultural relationship between the two countries.”

There also are plans on his part to work on collaborating with China on promoting women and children’s issues since “the world is getting more concerned now about women and children   and with china’s population we shall learn and exchange ideas on how to care for our women and children…we need to open up new areas of diplomacy and go beyond the traditional diplomacy. We need to improve on our relationship from economic and trade to cultural and political diplomacy.”

Victor Foh also called for China to be   looked at as “a giant in the world” and that as a country, Sierra Leone has a lot to learn from China.

Giving some contributing role that Sierra Leone played in terms of China’s entrance into the United Nations, Ambassador Foh said Sierra Leone played a crucial role in ensuring China’s entrance into the UN Security Council at a time when most countries would not know how China will be today.  “It was Sierra Leone that moved a motion for China to be allowed, when they were trying to enter the United Nations”, a role played by SAJ Pratt when he was Foreign Minister of Sierra Leone, at the time.   “So, even as small as we are as a country, China has always been grateful to us for that and I also appreciate their gratefulness to sierra Leone in particular and Africa as a whole”, he said, proudly.

On another note, Ambassador Foh also assured Sierra Leoneans, that he is “coming to represent the state of Sierra Leone and the President of Sierra Leone. I am an Ambassador that will care for all sierra Leoneans regardless of political coloration; regional belonging or tribal belonging. I am coming to ensure, it is not politics all the time but to ensure good relationship, unity and try to welcome all shades of political opinion” and will “work towards ensuring sierra Leoneans in china feel proud. I believe that coming from a grass root party that cares for the poor, I am coming to ensure, that it is not a question of who has what, but what we have as a state of Sierra Leone and a nation that belongs to us all”

Sierra Leone’s diplomatic relations with China started in 1971. The Sino-Sierra Leone cooperation of mutual benefit started from 1984. The embassy is also accredited to a number of countries in South East Asia and the Pacific Region, including Japan, New Zealand, Vietnam, and India, amongst others.

Born in Jimmi Bagbo, Bo District, in Southern Region of Sierra Leone, Victor Bockarie Foh has played a pivotal role in Sierra Leone’s political landscape, especially in the All Peoples Congress (APC) political party. A product of Fourah Bay College, Victor Foh was   Assistant District Officer in Bonthe, Koinadugu, Bo and Kambia Districts and was Senior District Officer in Kenema and Kono Districts between 1970 and 1982. He is vastly knowledgeable on Sierra Leonean issues, given his years of services as District Officer  in the Sierra Leone Public Service in 8 (eight) out of 12 (twelve) Political Districts in the country. He is also the first indigenous Sierra Leonean graduate teacher at the Ahmadiyya Secondary School, Kissy Dockyard Freetown between 1969/70 school year, where he taught Economics.

Wrap Up of WAAPP Supervision Missi...