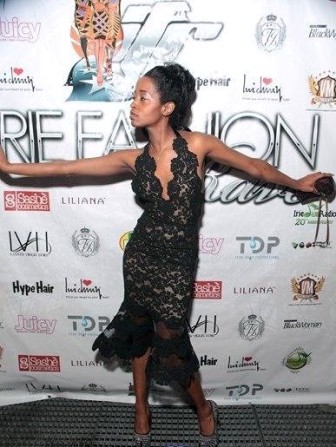 The event displayed models, designers and sponsors for the Sixth Annual IFR.  “It was a full house, about 150 people were in attendance” said Anthony Turner – Irie jam Media Group publicist and media co-producer of IFR.

The release party was a precursor to hosting what organizers describe as the Diaspora’s premier fashion event and an Award show slated for the posh Resort World Casino in Queens, New York on Sunday, April 28, 2013 starting at 6pm.

Jamaican Eion ‘Dreadless Ras’ Saunders, founder of Brooklyn’s ZYNC TV/New York Linkz will be honored posthumously with the “Media Achievement Award”   The award is presented to individuals for outstanding contribution to Caribbean media in the Diaspora, and the advancement of Jamaica’s arts and culture internationally.

Bobby Clarke, CEO of Irie Jam Radio and co-producer of IFR who made the announcement said, “We are thrilled to celebrate the life and legacy of our dear friend Eion Saunders for his trailblazing and groundbreaking achievements in Caribbean media. Eion was a much respected and admired TV producer who went the extra mile to cover the story. He was also a devoted father and husband.”

Syntyche ‘Syn’ Dawkins vice president of Irie Jam Media Group and co-producer of IFR extolled Williams and Smart as two Jamaican stalwarts who have “achieved excellence in their respective careers. Ken was a pioneer in media who played a significant role in helping to put reggae on the map here in the Diaspora. Smart has contributed much to the success that reggae currently enjoys here in the USA, We applaud them for their ongoing support of our Jamaican music and culture,”

IRF has retained famous radio personality Fluffy Diva Miss Kitty as host of the Sixth Annual IFR, she will be joined by DJ Roy (Irie Jam Radio, New York) as well as Yandy Smith of VH1s Love and Hip Hop who will be guest hosting and showcasing her new line of jewelry.

A stellar group of deejays including Dubb Master Chris, DJ Cali B, Steelie Bashment and Road International will provide music.

Meanwhile, organizers are permeating Rave fans and “Fashionistas” with assurances while anticipating whether hopes of producing a runway show with international standard comparatively to Paris Fashion Week or New York Fashion Week would come to fruition?