In a bid to address the poor sanitary issues cause by disease, filth and dirty water, the Sierra Leone Social Aid Volunteer (SLSAV) over the weekend engaged the people of Lungi in the need for latrines in their homes.

The program which was held at the Mahera Community Centre attracted a large number of youths and chiefs from different sections in the Lungi environs.

Speaking at the ceremony, chairman of the programme, Joseph Komeh said since the inception of the project people have learnt the habit of washing their hands after using the toilet, and the benefit of building latrines in their house.

He thanked SLSAVS for them taking such initiative to their communities, adding that it is a development that is meant for them and called on all to walk with them.

The chairman also called on all to work hand in glove to see that the good initiative of the organization is met.

According to the DHMT Social Mobilization Officer at the Ministry of Health and Sanitation Anthony Kenneth showered praise on SLAVS for working hard to see that health issues are settled.

He called on people not to relent in addressing health issues, adding water and sanitation will reduce the rate of sickness.

He called on all to take the lead to bring sanitation to their communities as it will help fight cholera and to utilize the services provided by Government.

In his statement the director of SLSAVS, Alfred Dumbuya, said the organization was established in 2008 as a strong team working in vulnerable communities in sensitizing people through protection training, community awareness and behavioral change, and also promotes social protection and environmental justice.

He said they are also involved in sustained advocacy on the promotion of women and children’s rights and empowerment training for women and youths.

“We have triggered the communities to see the reasoning and benefit of having toilets, safe drinking water, and also to get into the habit of hand washing,’’ he stated.

He said they are also using community driven strategies to promote sustainability and they are working with different civil society groups with the same initiative. 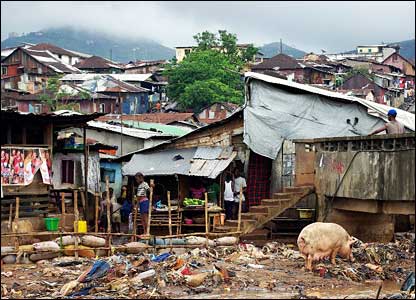