Brutality: the soldier minister confrontation now a subject of assault investigation against the Deputy Minister of Health, Mohamed Daudis Koroma, is said to have had deep political interference thus the shelving of case file into drawers of the LUC of Ross Road Police Faia Sellu.

Sources say the Deputy Minister, on many occasions, influences the conduct of police investigations against him.

It has been told that the LUC Ross Road Police, Chief Superintendent Faia Sellu, threatens persons assigned to the investigation of the matter against the Deputy Minister.  That the LUC has vowed to transfer any officer found divulging or try to sell out information evidentially exposing the inhumane attack by Deputy Minister Mohamed Koroma against Naval Corporal Sheku Bao.

Confirmed Ross Road Police sources say LUC Faia Sellu is in constant touch with Deputy Minister Mohamed Koroma, relaying to him all that his team of investigators gathered during the cause of findings.

It could be recalled that three months ago, the Deputy Minister of Health and Naval Corporal Sheku Bao, had a confrontation, directing invectives at each other hence the uncalled for manhandling of the former by bodyguards of the forenamed Minister.

The matter which was later reported at Ross Road Police, brought to the lime light, facts of rough treatment meted Naval Corporal Bao by the Deputy Minister of Health and team of body guards.

Credible information reaching this press states one alias ‘Bracket,’ close bodyguard to the Deputy Minister of Health, was at fore during the physical attack on Corporal Bao.

Persons with legal background have told this press that investigation of matters of assault need not go beyond 10 days.  Findings say delay in the matter against the Deputy Minister depicts extreme political interference of state actors.

Sources also disclosed that the delay of case by the police is as a result bribery made to the senior officers.

A police officer who spoke on the grounds of secrecy told this press that the LUC Ross Road is the key player to the slow pace in which complaint against the Deputy Health Minister is done.  “That even if the evidences are more than enough, he will not sit by and see a public official belittled by a junior military officer,” alleged comment of LUC Faia Sellu.

When contacted for comment, LUC Ross Road Police, Faia Sellu said ‘he will have nothing to say. And that he does not talk official matters on telephone.”

Jottings in statement of the Deputy Minister to the police reveal how he (Deputy Minister Mohamed Koroma) admitted having confrontation with Corporal Bao while driving on the highway along Kissy Road.

It has reached this press that Minister Mohamed Koroma, on occasions uncountable, was observed parking vehicle in the middle of the road along Kissy Road, obstructing the free flow of traffic.

Karefa Smart… The President that n... 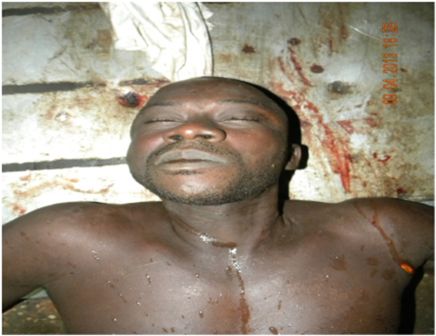