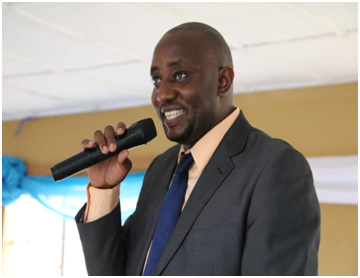 The General Manager the Irish League of Credit Union Foundation Limited, (ILCUF), Mr. Solomon Mwongyere on Monday 9th August 2021 informed this medium in an exclusive interview at his Fort Street office in Freetown that the Irish Aid and ILCUF are fully supporting their work in Sierra Leone to capacitate Credit Unions stressing that their main objective is to support the development and growth of the Credit Union system in Sierra Leone.  (Photo: General Manager: Solomon Mwongyere)

He explained that a Credit Union is formed when a group of people with the same interest agree to save together to create a financial pool out of which they can credit among themselves in time of need for productive or provident purposes revealing that the Credit Union is not new in Africa as it has existed for over 170 years and that Ghana was the first African country to start in 1955.

He revealed, “the Credit Union system is one of the sustainable non-banking financial institutions in the world. It is service-oriented and has low overhead costs. They have no such constraints such as banks and play an important role in mobilizing savings and providing loans to members with diverse backgrounds because they can be established at any location and at any level be it in a church, rural community or work place. Furthermore, they are organized and managed by the people themselves and continue to live with them in the long-term. It is the only business that can serve the needs of local people because it is community-oriented.”

He further underlined that wealth creation has something to do with capital accumulation and asked how can people accumulate capital for investment purposes in order to increase income and create wealth.

According to the ILCEF General Manager, Sierra Leoneans have not cultivated the culture of savings, the reason they spend money as they get it intimating that the current financial system does not encourage or motivate people to save small amounts based on their regular incomes and continued that one of their key component projects is financial literacy all in an effort to see the growth and development of Credit Unions in Sierra Leone, that they are using the Credit Union model to reduce poverty by promoting financial inclusion and increased savings and underscored that the primary objective of ILCUF is to promote more savings and credit by transforming the mindset of the people. He articulated, “when we started operations in Sierra Leone in 2011, there were only six Credit Unions in the country that have increased to 30 including study groups. Some members of Credit Unions who have been excluded from the formal financial sectors have now saved between Le5-7 billion Leones.”

He also informed that the Credit Unions are formed and owned by their members to serve their best interest, governed by a Board of Directors elected for a two-term of three years each, that Ireland, America, Albania, Ghana, Gambia and Kenya are some of the countries with renowned Credit Unions in the world competing with commercial banks and continued that Credit Unions operate mainly to build the capacity of their members by creating facilities like shares, loans with flexible collaterals after recommendations from other cooperative members as guarantors.

According to Mr. Solomon Mwongyere, commercial banks are partners in development with Credit Unions as they all compete in a very friendly manner, underscored the fact that Credit Unions serve the rural poor who are the majority and mostly illiterates, that as part of their contributions to Credit Unions in Sierra Leone, they also renovate their offices, provide furniture, office equipment, generators, safes, cabinets, motorbikes and other items to capacitate them.

“Plans are underway to introduce Management Information System (MIS) to three (3) Credit Unions in Sierra Leone that will be fully computerized to be later followed by other Unions. Currently we are operating in 12 out of the 16 Districts in the country,” he disclosed. Mr. Solomon Mwongyere also revealed that there are over 7,000 members of Credit Unions nationwide with over Le5 billion savings and Le4 billion loan portfolios respectively, asserting that loans are given out to members with minimal interest, highlighted that Credit Union members have helped vulnerable people, especially women and youths to save and later loan money from their Unions which they have invested into economic opportunities and the proceeds later used to pay the school fees of their children as well as take care of their homes reiterating that only Credit Unions offer such an opportunity. He commended the Credit Unions in Moyamba and Kambia Districts for maintaining their assets and commitment to savings and loan repayments respectively, explained that there are different types of cooperatives and that the Credit Union is the only association specialized to provide financial services to its members. He said they are working closely to complement the efforts of the Cooperative Department in  the Ministry of Trade and Industry and the National Cooperative Credit Union Association to supervise, monitor, conduct joint audits, trainings and further build the capacity of the Credit Unions affirming that sustainability of the Credit Unions rests squarely with their memberships who have bought shares and contributed savings to build their own financial institution concluding that fully paid up members of Credit Unions are entitled to contest for positions as well as vote and be voted for at Annual General Meetings.