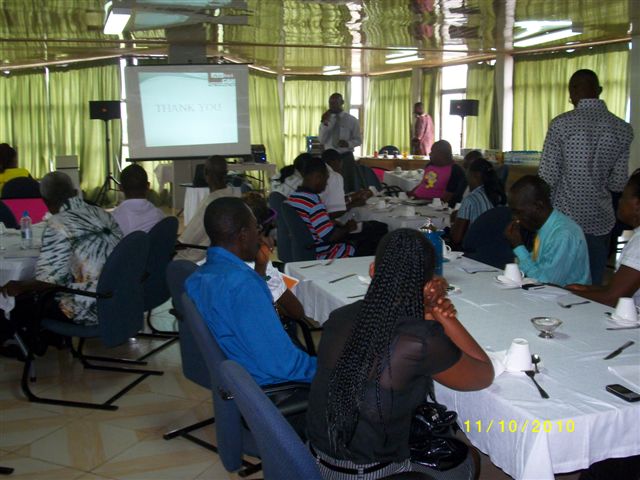 Media stakeholders under the umbrella name of Media Reform Coordination Group in Sierra Leone (MRCG -SL) in partnership with Media Foundation for West Africa (MFA) based in Ghana, have held fruitful discussions geared towards safety of journalists in the discharge of their duty.

Other critical partners who participated in the event are the Sierra Leone Police (SLP), the Office of National Security (ONS), the Sierra Leone Armed Forces (RSLAF) and Civil Society Organizations (CSOs).

Two panel discussions on the “Safety of Journalists situation in Sierra Leone” and “Media and State Security Institutions” were facilitated by Mr Ransford Wright, Executive Director of the IRN and Dr Williette James, Head of Mass Communication Department at FBC respectively.

During the stimulating interactive sessions, panelists shared experiences and perspectives on the topics at hand. Various forms of situations and scenarios militating against the safety of journalists were identified, ranging from the conditions of the workplace to community and state perpetrators of attacks against journalists.

The President of WIMSAL and Female Editor, Femi Coker, made a strong submission about sexual harassment of female journalists by their male counterparts, and called for the “formulation of policies by media houses to curb the unprofessional practice”.

In his welcoming remarks, the National Coordinator of MRCG, Dr Francis Sowa, informed the forum that “the outcomes of the discussions would inform the formulation of a National Policy on Safety of Journalists in Sierra Leone”.

The event was climaxed by the launching of the Report on the on the study of State of Safety of Journalists’ Policies and Practices among Media Houses in Sierra Leone by the Minister of Information and Communication, Mohamed Rhaman Swarry, who declared the forum open.