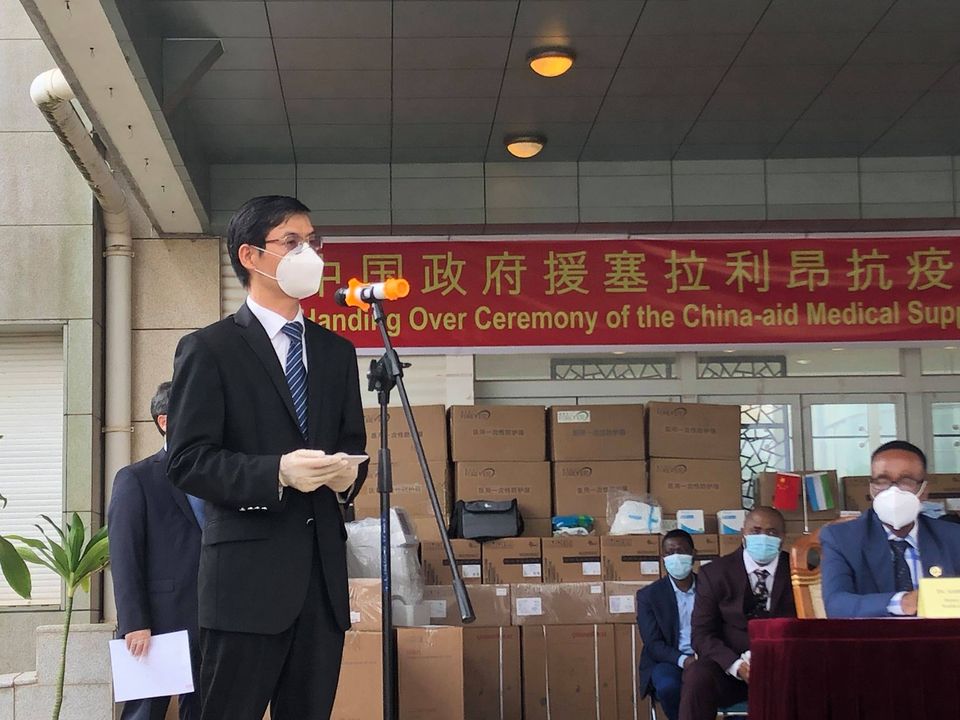 H.E. Hu Zhangliang, the Chinese Ambassador to Sierra Leone has revealed that from October 26 to 29, 2020, the Fifth Plenary Session of the 19th Communist Party of China Central Committee (hereinafter referred to as “the Session”) was held successfully in Beijing.

He stated how H.E. Xi Jinping, General Secretary of the CPC Central Committee, made important speeches at the session and that the Session adopted The CPC Central Committee’s proposals for formulating the 14th Five-Year Plan (2021-2025) for National Economic and Social Development and the Long-Range Objectives Through the Year 2035 (hereinafter referred to as “the Proposal”) maintaining that the above attracted wide attention and positive response from both home and abroad.

He asked these questions: What is the significance of the Session? and What the Proposal is about?

The Ambassador said he would like to take the opportunity to share some of the highlights with their Sierra Leonean friends.

Giving a Background and Significance of the Session, the Chinese Ambassador noted that 2020 is the year in which the time frames of the Two Centenary Goals converge and is also a juncture linking the 13th Five-Year Plan (2016-2020) and the 14th Five-Year Plan.

He said the 14th Five-Year Plan period covers the first five years from 2021 to 2025 in which China embarks on a new journey toward achieving the second centenary goal of fully building a modern socialist country.

“During the 13th Five-Year Plan period, China succeeded in building a moderately prosperous society in all respects and achieving its first centenary goal based on previous achievements,” he disclosed furthering how in the past five years, China’s Gross Domestic Product (GDP) increased substantially and by the end of 2020, it is expected to cross the 100-trillion yuan ($14.93 trillion) mark.

He said 55.75 million rural residents were lifted out of poverty and more than 60 million new urban jobs created maintaining that the annual grain output has remained above 650 million tonnes for five consecutive years, which effectively guaranteed China’s food security and self-sufficiency.

According to him, these achievements demonstrate that under the leadership of CPC and by upholding Socialism with Chinese Characteristics, the Chinese nation has made a big stride toward its great rejuvenation.

From a historical point of view, he said, China is still in an important period of strategic opportunity for development stating how there are new developments in both opportunities and challenges.

He said under such circumstances, the Session adopted the Proposal and it highlighted the progress made during the past five years, laid down guiding principles to be followed, projected major economic and social development targets for the next stage and charted the course for China’s development in the next 5 to 15 years toward modernization.

Dilating on the Proposed Targets Through 2035, he said, the session raised the following long-range objectives for China to basically achieve socialist modernization by 2035:

— China’s economic and technological strength as well as composite national strength will increase significantly. A new stride will be made in the growth of the economy and the per capita income of urban and rural residents. Major breakthroughs in core technologies in key areas will be made and China will become a global leader in innovation.

— New industrialization, IT application, urbanization, and agricultural modernization will be basically achieved. China will succeed in building a modernized economy.

— The modernization of China’s system and capacity for governance will be basically achieved. The people’s rights to participate in national affairs and to develop as equals will be adequately protected. The rule of law will be more comprehensively strengthened.

— China will become more powerful and competitive in culture, education, talents, sports and health. The well-rounded development of all people and social etiquette and civility will be significantly enhanced. China’s cultural soft power will grow much stronger.

— Eco-friendly ways of work and life will be advanced to cover all areas of society. Carbon emission will steadily decline after reaching a peak. There will be a fundamental improvement in the environment with the goal of building a Beautiful China basically reached.

— The opening-up will reach a new stage with substantial growth of the country’s strengths for participating in international economic cooperation and competition.

— The implementation of the Peaceful China initiative will be promoted to a higher level. The modernization of national defense and the military will be by and large achieved.

— People will lead a better life. More notable and substantial progress will be made in promoting well-rounded human development and common prosperity for everyone.

Mentioning the targets for the 14th Five-Year Plan, the Chinese Ambassador said the Proposal states that during the 14th Five-Year Plan period, the socioeconomic development must stick to the Five Principles, namely ensuring Party leadership over all work, committing to a people-centered approach, continuing to deepen reform and opening up, adopting a new vision for development and upholding a systematic perspective. Major social and economic development targets for the 14th Five-Year Plan period are suggested to be the following Six “New”s, which he said are: New strides made in economic development, New steps taken in reform and opening up, New enhancement achieved in social etiquette and civility, New progress made in building an ecological civilization, New level reached in the well-being of the people. New advancement attained in governance capacity.

The Ambassador said The Proposal also highlights several development priorities. On the top of the priorities is upholding the central role of innovation in the modernization drive and implementing the innovation-driven development strategy. It points out that China must nurture a strong domestic market, establish a new development pattern and comprehensively deepen reform in pursuit of a high-level socialist market economy.

It also stresses that China will hold high the banner of peace, development, cooperation, and mutual benefit, strive to create a favorable external environment and promote the building of a new type of international relations and a community with a shared future for humanity.

He acknowledged that the tasks are arduous but the prospects are bright highlighting that under the staunch leadership of the CPC Central Committee with Comrade Xi Jinping at its core, the Chinese people have full confidence to realize those goals and transform China into a great modern socialist country.