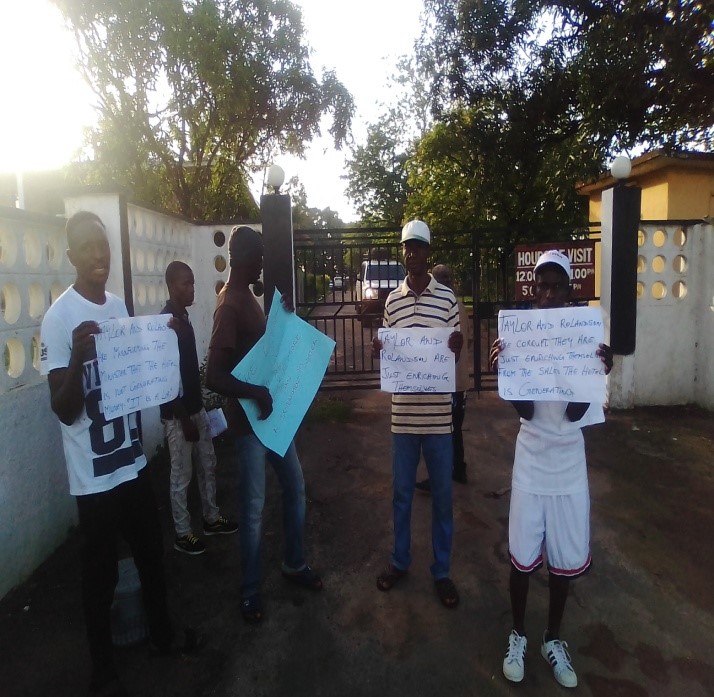 A total of twenty six (26) former employees and several volunteers of the Lungi Airport Hotel have held a peaceful protest over what they described as unlawful dismissal by the hotel management.

The peaceful demonstration was held on the 12th June 2019 with placards in front of the management of the hotel at the Airport Ferry Road, Lungi.

According to the aggrieved workers, they were redundant without official letters adding that they have informed all relevant authorities with regards the payment of their six months salaries and termination benefit.

The demonstrators further explained that they were employed with official appointment letters by the previous management and cried that they deserved to be treated as Sierra Leoneans. “The new management sent us home verbally without any written document”, they told Journalists.

They disclosed that they have requested for a peaceful Sit –In-Action from the Local Unit Commander, A.G.Kabba, at the Forecourt of the Lungi Hotel but were turned down.

“We had written letters of complaints against the Ministry of Tourism and Cultural Affairs on how we were unjustly treated by the said Ministry to Office of the Ombudsman, Parliamentary Committee on Labour in Parliament”, they said and advanced that they were verbally driven by the Manager of the hotel, Mr.J.W.Taylor since 16th January this year with no redundancy notice.

A patrol team led by the Operations Commander of the Lungi Police Division brutally arrested and detained seven demonstrators on the grounds of unlawful gathering and riotous conduct.

On his own side, the LUC, Lungi Police Division, A.G.Kabba told pressmen that the police had no knowledge about their protest and that any lawful protest must have police presence to maintain law and order.

A.G.Kabba continued that he had earlier called the protesters to a meeting in his office together with the hotel management where he gave them an admonition to exercise patient until government and other authorities intervene and address the issue. “Police will not sit down and see people taken the law into their own hands”, said Lungi LUC.

The LUC said the matter will be investigated and charged to court so that sanity will be maintained across the township of Lungi and that people should not demonstrate without getting permission from the police.