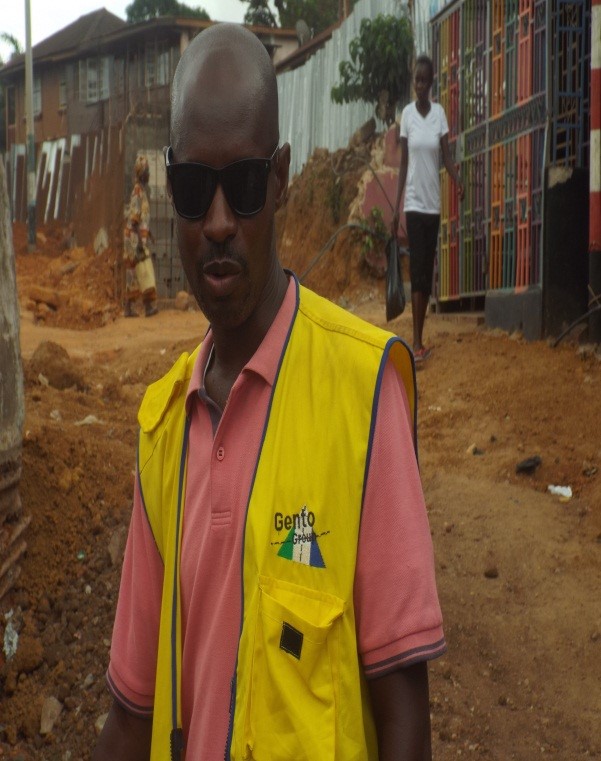 Residents of Congo Bridge and Sanders Drive have expressed fear that the ring road construction which comprises Jomo Kenyatta Road, Hill Cot Road, Regent Road and Kingharman Road is posing death threats for them as legal occupants with certified land documents from the Ministry of Lands and the Office of Administrator and Registrar, Roxy Building in Freetown. (Photo: Engineer Idrissa Koroma)

The construction project which was expected to be completed by May this year but it remains a topical issue as death hangs to fall upon mankind as a result of unpleasant construction system that is not going down well with the affected citizens, who said they have nowhere to relocate themselves.

In tears, the chairlady for Congo Bridge vicinity, Salamatu Sesay, owner of the house where the ring road gutter is emptied said the water does not only flood the house and forcing her family to quit the compound for the past one week but property also destroyed while electric cables fused and dislocated. The angry, frustrated and helpless residents said they are blaming the Sierra Leone Road Authority [SLRA] for not extending the gutter down to the stream to divert unnecessary deaths among poor and vulnerable Sierra Leoneans.

She argued, SLRA never pay a single person for land even though they have authentic documents and registered with Roxy Building and stressed that, either Gento or SLRA never give them notice to quit and described Gento’s road construction work as destructive because according to them, no authority have listened to the concerns they have raised. She called on the intervention of central Government through the implementing agency for them to be treated equally as citizens. Affected victims and the perilous gutters Yayea Sesay of 28 Congo Bridge said they always worried when it’s heavily raining at night especially for the innocent children and appealed to SLRA to collaborate with Gento so that the gutter would be directed where the water to be emptied safely.

She said the dangerous gutter which is threatening lives divides Congo Bridge and Sanders Drive and called on Gento and SLRA to treat them as human beings not as beast of burden.

Another resident, Tommy Kargbo intimated that the gutter is doing more harm than good to the vulnerable community and recalled how the little drop of rain which comes recently destroyed properties and rendered people homeless as a result of the big gutter where four ring roads emptied. He expressed worry that if the problem remains unresolved towards July and August, death will warrant the vicinity as in the case of the August 14th mudslide.

Speaking on behalf of Gento Group of Company, the project Engineer, Freetown ring road project, Engineer Idrissa Koroma said Jomo Kenyatta Road and Kingharman Road junction is a place that was normally flooded because the gutter was too small in a way that it cannot accommodate the amount of water coming down from the hill. In fact, he said, that was why the construction company widened the gutter from the junction to the stopping point of the project to avoid a repeat of flooding and other forms of disasters in that particular surroundings. He promised that after they finished their work, flooding in that area will be thing of the past. He explained that SLRA has earlier conducted a property check in that disaster prone area and have paid all legal occupants except those without valid documents. He said their contract did not exceed beyond that point and encourage affected property owners to meet SLRA and other concerned authorities to go into negotiation to either relocate them or extend the gutter to the stream to protect dwellers and properties in the vicinity or else disaster may strike the community.