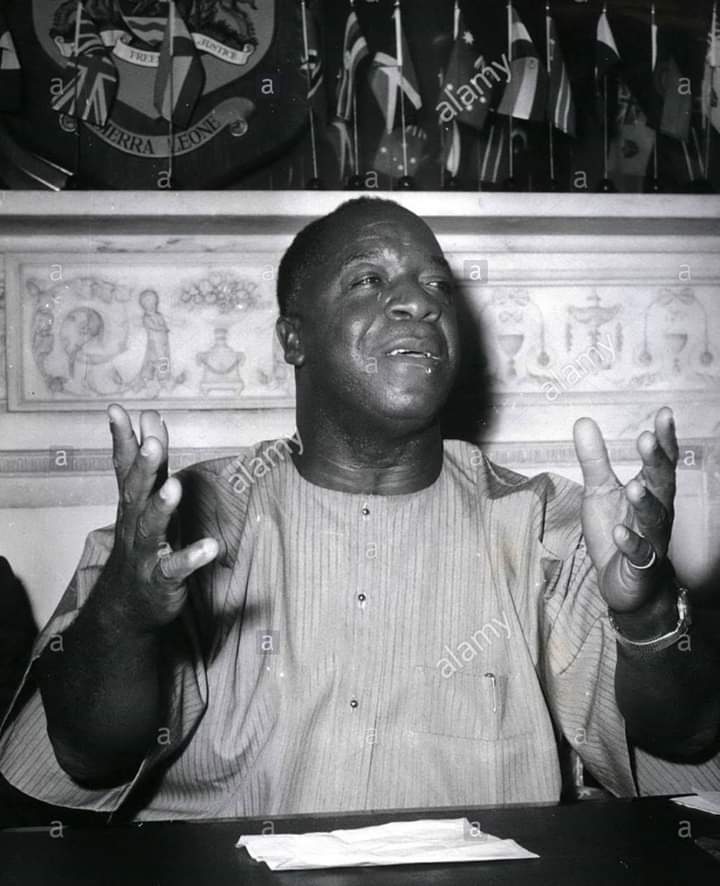 April 29, 2019 – On this day gone by: Sierra Leone gets Albert Michael Margai as the second Prime Minister.  That was 55 years ago today April 29, 1964.  He came to the seat of power, following the death the previous day of his half brother; the first Prime Minister, Milton Augustus Margai; a day after the new Nation marked its third Independence anniversary. (Photo: August 8, 1966, Sir Albert Margai is talking at a press conference at the Sierra Leone High Commission in Portland Place, during the Commonwealth Prime Ministers’ Conference.)

Prior to assuming the office of the Prime Minister, Albert Margai held cabinet positions in the Ministries of Agriculture, Education, Finance and Natural Resources.

The country’s currency in circulation today, was introduced by him as a legal tender during his tenure as Minister of Finance. There, he also pioneered the decimal currency and created the Bank of Sierra Leone as the country’s central bank.

Following the 1957 Colony and Protectorate elections, during which period there were 39 and 12 Paramount Chiefs’ parliamentary seats, Albert challenged Milton for the Sierra Leone People’s Party’s leadership position and won. He however stepped down because Milton promised he will award a cabinet position to Albert’s friend, Siaka Probyn Stevens. The former didn’t keep his promise.

Albert left the SLPP in 1957, he teamed up with Stevens and they conceived a new political party called the People’s National Party.

Albert Michael Margai was born in Gbangbatoke in the Banta Chiefdom where modern Moyamba District is. He attended St. Edwards Secondary School in Freetown. He was 13 years in his first job as a nurse, before travelling to Britain to study law; graduating in 1948. He returned home as a lawyer, set up his private practice and joined the Supreme Court of Sierra Leone.

He was a founding member of the Sierra Leone National Party, which was formed in 1949, to negotiate and strategise ushering Independence for his country. Sir Albert lost to the opposition All People’s Congress in the 1967 election and that’s how he went down in African history as the first leader to officially lose an election.

He has a son, Charles Francis Kondo Margai, a Sierra Leonean politician and constitutional lawyer who served as Attorney-General and Minister of Justice in 2018.

Albert Michael Margai who died December 18, 1980, became Sierra Leone’s second Prime Minister on this day gone by with me Claudia.