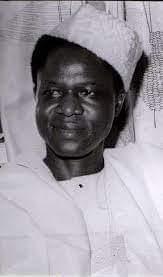 On this day gone by: One of the closest and most trusted political advisers to President Siaka Probyn Stevens dies. That came to pass 25 years ago today April 30, 1994.

Sorie Ibrahim Koroma was one of the 13 founding members of the All People’s Congress political party. He was the first Vice President of Sierra Leone from April 19, 1971 retiring on November 28, 1985.

Popularly referred to as S.I. or S.I. Koroma or Agba Satani, the former Sierra Leonean politician and labour activist was born in Maforki Chiefdom in the Port Loko District. He attended the Government Model Primary School in Freetown and the Bo School in Bo District, southern Sierra Leone.

The only child of his mother, S.I. became a member of two important ruling families in Port Loko – the Bangura and Dumbuya families. He was Minister of Trade and Industry, Agriculture and Natural Resources and Finance.

In 1978, he was appointed First Vice-President after the APC declared itself the only legal party.

Sorie Ibrahim Koroma who was also a Member of Parliament died on this day gone by.