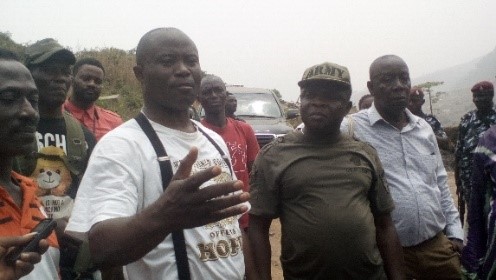 The owner of the newly constructed private building and family members at Charlotte Village were taken by surprise by the Minister of Lands Housing and the Environment, Dr. Dennis Sandy when he verbally pronounced that, the 90% completed building was no longer a private property but to be used as a dwelling home/office for Forest Guards/Rangers who would be working under his supervision as Government Minister.  (Photos: Dr. Sandy, his Deputy and cross section of armed security personnel)

Dr. Dennis Sandy was accompanied by armed OSD and military officers when he made what the Charlotte people referred to as an unfortunate pronouncement on Thursday, February 28th, 2019 after destroying what he (Dr. Sandy) described as makeshift structures which he said, are found under high tension Bumbuna cables.

When he was talking to the caretaker of the converted building, Dr. Sandy said he would compensate the landlord with the sum of five million Leones (Le5M) to find another place for the Forest Guards to take over. In an unpleasant mood, the certified land owners said the money the Minister promised to compensate them was not commensurate to the value of the whole building but they have no option except to listen to him but quickly mentioned that they relied upon their documents although the Minister further pronounced that all lands belong to Government.

The Minister therefore invited the occupant of the building to visit him the next day in his office at Youyi Building in Freetown with authentic land documents before the Le5M may be handed over to him.

But what was disheartening according to the indigenes and descendants of Charlotte, the Minister and partners described the demolished area as not only a no go area but also a disaster prone area and nobody would be allowed to live within that vicinity but the one-million-dollar question was that, are the Forest Rangers not human beings or not susceptible to disaster? The indigenes complaints that, Charlotte has existed for over three hundred years and Minister Sandy has been the first to demolished and nullified their lands documents which were signed by past Directors of Lands and Surveys under the then led Government of former President Ernest Bai Koroma of the All Peoples Congress (APC).