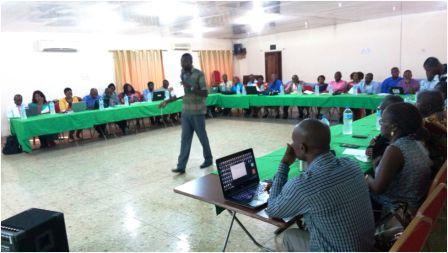 As Zoonotic Diseases continue to pose threat to human health, the Ministry of Health and Sanitation through the One Health Platform which consists of Ministry of Agriculture and Forestry, Environment Protection Agency, Office of National Security, WHO, UNICEF and NGO partners last week with support from Breakthrough Action-USAID validated Sierra Leon’s first Message Guide on Zoonotic Diseases at the Hill Valley Hotel in Freetown.  (Photo: A Cross Section of One Health Stakeholders)

While giving out the objectives of the Message Guide Validation Workshop, Chief Health Education Officer and Programme Manager at the Health Education Division, Ministry of Health and Sanitation stated that the key objective was to reintroduce the message guide to a group of informed experts to not only review the major changes to the Message Guide since the December Review Workshop in 2018 but also to make expert contributions, thereby improving the contents of the guide, adding that they were also going to review and revise the needed messages for technical accuracy, cultural and contextual appropriateness, commonly used languages, words and use of effective messaging principles.

Mr. Conteh was optimistic that the validated Message Guide would be very useful in risk and Health Communication, Community Engagement, and Media Engagements to educate the public on the dos and don’ts as a way of preparedness and prevention on zoonotic diseases, adding that majority of the diseases that pose threat to human health came from zoonotic animals and are as a result of unhealthy interference/interaction with the environment. He added that the Message Guide would not only serve as a resource material but would also be useful in further development of messages and Information Education and Communication Materials on Zoonotic Diseases for Public Education and Communication. Mr. Conteh also hoped that the Message Guide would be useful to learning institutions, like the Schools, Colleges and Universities. “The Message Guide is not only the first in Sierra Leone, but also the first in the West African Sub Region” Mr. Conteh Noted.

Deputy Chief of Party, Tina Dickerson at Breakthrough Action, while giving out the overview, noted that the Message Guide emanated from  the One Health Platform which was launched by the Government in June, 2017, to spearhead collaborative efforts amongst government sectors to prevent, detect, and respond to existing zoonotic diseases and emerging pandemic threats and was  grounded on the premise that the health of people is connected to the health of animals and that of the environment for which the platform identified the following Country Priority Zoonotic Diseases for preparedness and response activities in the country: Viral Hemorrhagic Fevers (Ebola, Lassa fever, Marburg Virus, Bombali Virus), Rabies, Zoonotic Influenzas (Avian also known as Bird flu), Swine also known as Pig flu), Salmonella, Anthrax, Monkey Pox and Plague.

She educated that zoonotic diseases are diseases that are initially spread between animals and people and may have the potential to then spread from Person to Person.

She further said that the Message Guide does not only highlight the zoonotic diseases but also carries key messages on the mode of transmission, signs and symptoms, preventive messages and how to safely live with domesticated animals and bush animals and the environment. “The Message Guide clearly states the responsible persons and institutions to contact in the case of animal bite, scratch and death and emphasizes the need for people to limit contact with bush animals, as it puts them at risk of zoonotic disease” she continued    “most known human infectious diseases, and about three out of every four new diseases originate from animals”. She Added.