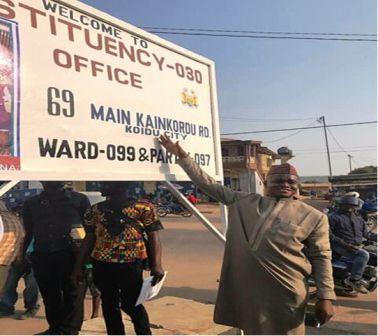 On the 11th of January 2019, at about 3 p.m., Honourable Emmerson Lamina, who happens to be the head of the Coalition for Change Party {C4C} in Parliament, representing Constituency 030, established a new office at 69 Kainkordu road, Koidu city, Kono district. In attendance, were representatives from various political parties including the main opposition All People’s Congress Party (APC) and the ruling Sierra Leone People’s Party (SLPP).

In his brief but significant statement, the honourable dilated on the importance of transparency, which he said is one of the promises he made to his constituents. The honourable presented a cheque of Le35 million, 4 new motor bikes, and some office equipment. This he said, is from the Diamond Area Community Development Funds that he received from the government of Sierra Leone. The total amount of money received from the government was Le69,178,82.19

Many participants lamented that this is the second time such a honest gesture is displayed by elected honourables from Kono. The first was witnessed when honourable Tom Tucker of the APC dished out DACDF monies to his Sewafe community. ”Emmerson don do more because e add pa de money some millions for licence four bikes”,this was an observation made by Saffea Mohamed James, a resident of Kono.

This particular display of honesty and transparency which he promised his consituency and the people of Kono did not come as an amazement because the honourable displayed such traits when he was mayor of the Koidu municipality.

It should be noted that on the removal of his boss, former vice president, honourable Sam Sumana, the erstwhile government that was led by the All People’s Congress party{A.P.C}, dismissed and subjected him to an inquiry that never found him guilty.

Meanwhile, to support the flagship programme of the president, the honourable took us to a site at Farandu village, Gbense chiefdom, where he intends to erect a school for children in that community. He said this gesture came about as a result of the promise he made to a young girl who told him that if he is to be victorious, he should make a school available in that community. It is also not a secret that children in remote villages walk to distant places to acquire education. When he was interrogated about quality teachers, he said, there are a lot of qualified and unemployed teachers with T.C and H.T.C, who are able to adequately provide the education needed. Representatives from other political parties, mining companies, National Electoral Commission, the media and banks, assured the honourable of their commitments towards development whenever the need arise.

The honourable said the office is for everyone within his constituency, regardless of party affiliation .He also informed that the parliament will be renovated soon, so sitting of parliament will be taking place in a different location.

The honourable also said that a suggestion box will be available at the office to encourage diverse opinions from the public; this he said was learnt during his brief stay at the United Kingdom parliament. He furthered that he has no doubt in his colleague honourables from Kono.

Honourable Emmerson also assured all and sundry that at least every month, honourables will be visiting there various constituencies. I asked the honourable about his take on corruption and he responded while making his conclusive statement. ‘’People who steal state funds are celebrated, people who honestly deliver face crucifixion ‘’, end of cote. The honourable said government issues are not businesses as usual; everyone is expected to be transparent and accountable to the people.

However, the Honourable assured residents of Kono that his colleagues are credible enough to deliver on their promises.