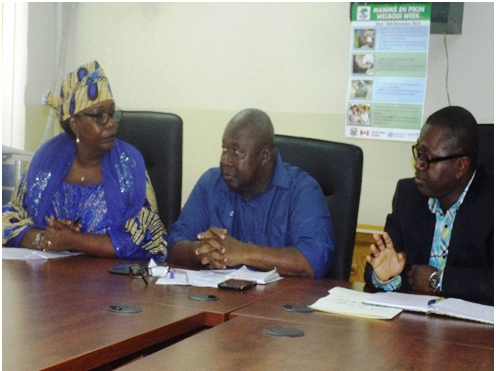 This was disclosed yesterday in a press briefing at the Ministry of Health and Sanitation (MoHS) at Youyi Building, Freetown, by the Programme Manager for Public Health and Education Division and Chairman of the event, Lansana Conteh, who disclosed that during the Maternal and Child Health Week otherwise interpreted in Krio as ‘MAMA EN PIKIN WELLBODI WEEK, the activities would include Interactive Public Health Education, Delivery of Vitamin A Supplements, Deworming, Routine Immunizations, Defaulter Tracing, Malaria Service Uptake and Referral of Pregnant Women for antenatal care at community level.

In his opening remarks, Chairman Lansana Conteh expressed profound gratitude to journalists for the continual support with regards to disseminating information or messages to the public about health issues. He therefore appealed to media institutions to continue giving their unflinching support to the MoHS in disseminating messages or information on health issues including malnutrition, malaria prevention, immunization, hygiene, sanitation, ANC and Family Planning programmes.

The Principal Nutritionist in the Directorate of Food and Nutrition Division in the Health Ministry, Madam Solade Pyne-Bailey described the week as a period designated to the provision of integrated package of preventive health and nutrition services known to be highly cost-effective for improving maternal and child health, survival and development.

She disclosed that for this year, the first round of mass distribution of high impact preventive services was delivered in April 2018, whilst the second round is scheduled for November 23-26 in Bombali, Bonthe, Kambia, Moyamba, Port Loko, Western Urban and Rural nothing that the week aims at reaching out to every mother and child in the aforesaid districts.

Madam Solade Pyne-Bailey furthered that the launch ceremony of the week would serve as a platform for mass sensitization on different health issues, including malnutrition, malaria, immunization, hygiene, sanitation amongst other infirmities, adding that a total of 954,880 children under five years would be targeted; 282,459 children under two years would be traced to vaccinate defaulters on the routine immunization; and, also 338,852 pregnant women would be targeted for referral and ante-natal care visits.

“As routine deliveries of all these services are being strengthened, the country is transitioning from campaign-based delivery of these services to routine health facility-based services including outreach-based. In this light, some districts (Bo, Kenema, Koinadugu, Tonkolili, Pujehun, Kono and Kailahun) have been eliminated from the campaign because they would soon receive support to strengthen routine services through UNICEF, Helen Keller International and MoHS,” said the Principal Nutritionist.

Madam Bailey furthered that a team from the MoHS would be visiting schools, religious houses, market places, lorry parks, slum communities, remote and mountainous areas as a commitment with donor partners to reach the targeted number of beneficiaries across the seven districts with successful outcomes.

Giving an overview of the week, the CH/EPI Programme Manager, Dr. Tom Sesay said the MoHS has undertaken another evidence-based high impact and cost effective set of interventions that would no doubt contribute significantly to the reduction of maternal and infant mortality ratios in the country.

He disclosed that indicative results from the MICS 2017 survey suggested that a marked improvement in maternal and infant mortality has been achieved since the last Demographic and Health Survey (DHS) in 2013, adding that the infant mortality rate has reduced from 92 per 1000 live births to 56 per 1000 live births in 2017. Dr. Tom Sesay furthered that under-five mortality has reduced from 156 per 1000 to 94 per 1000 between 2013 DHS and 2017 MICS survey. He disclosed that the Ministry was waiting for the next Demographic and Health Survey for 2018/2019 which, he said, would add credence to the process. Dr. Sesay averred that certainly, vaccinations have contributed significantly to this improvement.

He appealed to relative health workers to execute the process well so that many children and women would benefit from the exercise.