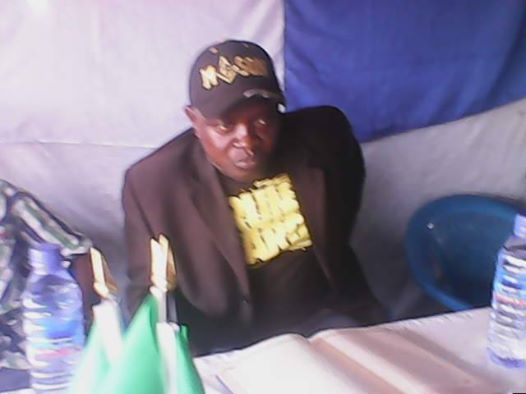 In a public statement by the Head of the Criminal Investigations Department (CID), Chief Superintendent of Police, Gabriel M. Tommy,  police have been in search of the former Minister for quite some time, “and to hear him speak on 98.1 Radio Democracy, gave us the opportunity to lay hands on him as a fugitive, for further investigation”.

The CID boss added: “It requires no warrant of arrest for a suspect of such nature because; police have already been in search of him”. Asked whether the arrest does not relate to what opposition loyalists describe as the ‘brutal truth’ emitted by the former Minister on local radio, in connection with the opposition APC Party’s Assessment Report on the first 100 days of the Bio-led SLPP Government, Tommy responded on the contrary, saying, “it does nothing with Kabba’s statement on Radio Democracy, but a matter having to do with his vandalisation of a government vehicle that he refused to surrender to the appropriate authorities, after he left office”.

But the former Minister said the allegation against him by the Sierra Leone Police, as being a fugitive was baseless and unfounded, furthering to refute police correctness: “I know warrants are issued for the arrests of fugitives; but there was none in my case, yet the police described me as one. My detention was unlawful, therefore”.

Karamoh Kabba, the alleged fugitive said, he was the first to meet with the Vehicle Recovery Team, headed by Rado Yokie, to return the vehicles he possessed, “and on 98.1 Radio Democracy, Rado Yokie cited my action as a good example”. The former Minister also said the vehicle in question had been faulty way before the conduct of the general and presidential elections, “with a letter to the effect, written to the Transport and Aviation Ministry, for repairs, and as well, informing the Vehicle Recovery Team earlier that the vehicle had been towed to the nearest police station, in respect of a Press Release issued in that direction”.

He enjoined that among other allegations against him on the vandalisation of the government vehicle, “the police had stated that the vehicle was taken to a Government Garage at Wilkinson Road, with half engine, and upon visit to the garage, the vehicle was discovered with no engine, for which those working at the garage admitted to have removed the engine from the vehicle, upon instruction for investigation, and besides, the vehicle had parked at the Ministerial Building (Youyi Building) for a period of time, before it was towed to the Government Garage”.

Karamoh Kabba told the press: “I was baffled to hear the police say they have been searching for me, having spent well over a month with the Assistant Inspector General of Police (AIG) Operations, and some other police officers and law enforcement officials on a Cross-party Committee charged with a mandate to investigate the spate of post elections violence across the country plus my regular appearances on Television and Radio interviews in various parts of the country, including attendances to meetings in Makeni, Kabala, Port Loko and other areas, as well as my weekly presence at the APC Party Headquarters for meetings and conferences”.

He also disclosed that he honored the invitation of the IGP on a Wednesday, where they discussed state security matters which ended in a session of intimidation, based on subversive and treasonous allegations. He asked: “Why the police did not used that opportunity to arrest me as a fugitive, than wait to do so at a Radio Station, where I was granting an interview?”

The Head of Police Media, Superintendent Brima Kamara reiterated that the former Minister has to answer to the police for the case of a government vehicle that he failed to submit to the Vehicle Recovery Team, “after unidentified youths towed the vehicle to the Tankoro Police Division in Kono District, which was further towed to Freetown, by the Team, after it was discovered that some parts were missing from it”.

Asked why the arrest of Mr Kabba without a warrant, the Media Officer challenged that there is no part in the Law Books of Sierra Leone that says somebody has to be invited by the police for a crime commited. He quoted Section 13 (1), Act No.32 of the 1965 Criminal Procedure to qualify the arrest of anyone without a warrant, hence positively accused of committing a felony or a crime.

Superintendent Brima also said that prior to the former Minister’s arrest, the IGP Dr Richard Moigbeh had informed the APC Secretary General about Karamoh Kabba being investigated for a vehicle he failed to surrender, thus admitted that the Director of Crime Services apologised to the Karamoh Kabba, but said it was for a different case he declined to mention.