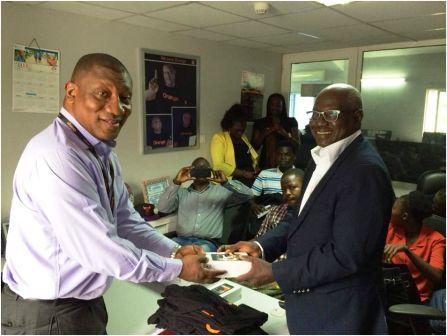 In its stride to help the people of Sierra Leone with better quality service delivery, Orange Sierra Leone has partnered with the World Bank to do a survey on the urban transportation system in the country using digital.

The aim of the project is to minimize the congestion in the transport system by using digital expertise in doing a survey that will look into the problems in the transportation sector.

The Director of Corporate Affairs, Barry Honnah, on behalf of the company and World Bank thanked the team from Fourah Bay College for honoring their invitation on the urban transportation project.

He added that the aim of the project is to help the transport sector but more significantly is the digitalization of urban transportation system both from the perspective of data gather to geo- locating specific points where you may have transport hubs or pass point across Freetown.

Mr Honnah noted that while addressing the survey team “the initial starting point will be at Lumley and as part of our commitment with the World Bank partnership we have agreed to provide 10 smart phones and sim cards for the execution of your duties”.

He added that Orange will also provide the team with some of our regalia during this process, adding “We are very keen to ensure that Orange takes part in this project which is very significant for the growth and development of Freetown and also for the development of the country”.

A transportation engineer and also independent Consultant to the World Bank, Badamasie Savage thanked Orange for the partnership and states that the project is very significant in terms of addressing the problems in the urban transport system, especially congestion which impact negatively on our economic productivity.

“The project is timely especially so when it is also addressing particularly the mass transportation problem”.

“I am very excited to be part of this project and was particularly pleased when I learnt from the team leader that we are partnering with Orange to provide smart phones”, he reiterated.

The Engineer stated that the ultimate objective is to ensure that when we design facilities for urban transport those facilities are climate resilient.

He said when it rains or floods the survey teams will be able to identify these areas for further communication.  The project seeks to use digital to locate some of these areas which floods during the rainy season.

Mr Savage noted that preliminary findings from the survey will be able to locate these areas and routes that drivers use during the rainy season.

The first phase of the survey will be done during the rainy season and in late October; the second phase will kick start. At the end of the project the Consultant will be able to put a report together indicating problematic areas and proffering solutions for them.

This project is supported by the Global Facility for Disaster Reduction and Recovery (GFDRR).

Grand Conspiracy At Metro Hotel Am...