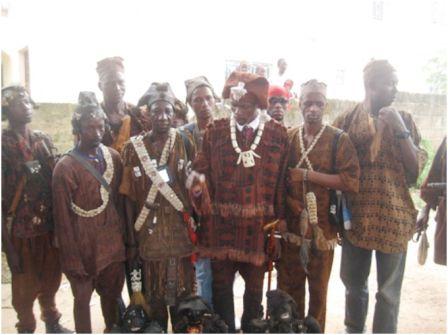 He will divulge well-hidden secrets about those days and he will also speak lengthily on the illegal and inappropriate appointment of one Muniru Sandi to head the Traditional Healers Association of which he is a member.

The former commander Kamoh Lahai Masaquoi shall explain the arrangements and meetings held across the country seeking the views of their membership before appointing their choice of president of the Association in the person of Dr. Jibao Amara to lead them. He will tell the public why the entire membership of the Association is totally against the hand-picked choice of Muniru Sandi to be president of the Association for obvious reasons. Some of which border on his lack of moral and etiquette, ineptitude, unfit, incompetent and having no fixed abode as some of the negative traits of Muniru Sandi.

Speaking to this press, Kamoh Lahai Massaqoui maintained that they were shocked when they came to understand that someone within the SLPP hierarchy had manipulated and forwarded the name of Muniru Sandi as the fittest person to be president of traditional healers in Sierra Leone, adding that this information angered majority of members of the association to the extent they wrote a letter to President Bio informing him about this unlawful, unwanted and unpopular decision taken on behalf of the members of the association without their consent.

Kamoh Lahai Massaqoui and his colleagues who are in the majority are calling on President Julius Maada Bio to revoke the appointment of Muniru Sandi because the members do not want him. Kamoh Lahai Massaqoui and his colleagues are calling on President Bio to appoint and accept and approve Dr. Jibao Amara who they say is a blue-blooded member of the association who has the affairs of the association at heart. Kamoh Lahai Massaqoui and his colleagues are therefore calling on President Koroma to annul the crooked and unpopular appointment of Muniru Sandi and announce Dr. Jibao Amara as the new president of the association who the majorities want as their president.