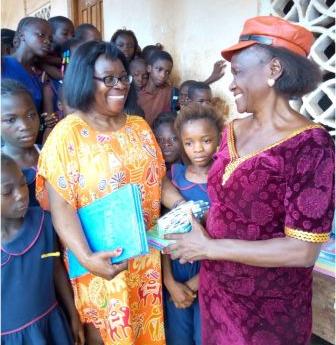 The World Child Connect (WCC), an international non-Governmental organisation based in England, in late April this year donated learning and teaching materials to two Primary Schools and an evening classes institution, normally referred to as Syndicate.

The three institutions that benefited from the donations are the J. C. Academy Primary School in Kerry Town, the Allen Town Municipal Primary School at Allen Town and the Abdul Children’s Foundation Academy situated at 79 Blackhall Road, Kissy, in the eastern part of Freetown.

Making the presentations of books, pencils, crayons, blackboards, pens, world maps, footballs, packets of assorted chalk, and erasers to the three schools at their locations on Thursday, 26th. April, 2018, WCC Founder and Executive Director, Ms. Althea Gordon, stated that her greatest passion in life is education.

She disclosed that the WCC is determined to give as many poor children as possible the opportunity to get an education so that they will be empowered to remove themselves and their families from the cycle of poverty that they were born into.

She also disclosed that they normally help in some part by giving food, medicines, shoes, lunch, footwear and uniforms to the school pupils as well as help in providing salaries for some of the Teachers from time to time.

She also stated that they also sensitise and encourage the teachers and pupils to get involved in agricultural activities, noting that they mostly provide them with the seeds and equipment to enable them carry on the agricultural work.

She maintained that they undertake fund raising activities in the United Kingdom to support schools in various parts of the world and make sure that they spend all the money on the children for whom the funds are raised.

She revealed that they have plans to start providing water and health and sanitation facilities for the schools that they support.

She further disclosed that they are supporting schools in Sierra Leone, Jamaica, Ghana, Gambia, a special needs school in Ondo State in Nigeria and that they are now planning to expand into other places mostly in Africa and Asia. Receiving her own items, the Head Teacher of the Allen Town Municipal Primary School, Mrs. Olive Mansaray, paid glowing tribute to Ms. Althea Gordon who she described as their mother. She stated that they are very happy with the materials and promised that they put them to good use. She revealed that the school was founded in 1902 and has produced a lot of prominent Sierra Leoneans. She explained that of the seven Teachers that she has only four of them are receiving salaries. She appealed to the WCC to help them develop their water and toilet facilities.

On his part, the Head Teacher of the J.C. Academy Primary School, Pastor Timothy Charles revealed that his school was established in 2015 with four Teachers, none of whom is being paid a salary. He appealed for chairs, desks, tables and lunch for the children and teacher as well as agricultural seeds and equipment.

Making a statement after receiving his items, Mr. Abdul Kargbo who is the Proprietor and Head Teacher of the Abdul Children’s Foundation Academy said he was the happiest man to have been blessed with such a loving and caring mother like Madam Althea Gordon. He explained that he is teaching children who cannot even afford to pay or get food at home. He noted that his greatest love is to give education to children as they are the future of the country. He appealed to WCC to help them with blackboards, chairs, desks, and a building where they can house the school as they are currently running the school under a mango tree in the open air. The school was founded in 2012.

Responding, Madam Althea Gordon told them that she will relay their massages to the Board of Trustees and Management of World Child Connect (WCC) in England. She paid special thanks to Madam Olive Allafi Cassell, who she described as her host in Sierra Leone, referring to her as her dearest sister and a stanch supporter of her work.

Madam Althea Gordon, who is a Jamaican and a retired school Head Teacher in England, is expected to return to Sierra Leone later this year.