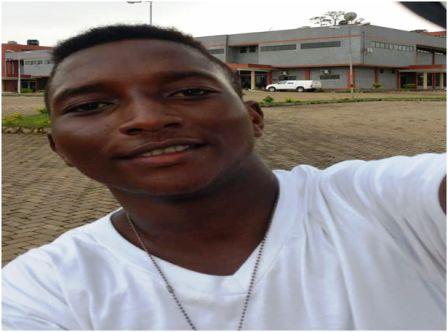 Alaphia Serry, a first year student at the  Institute of Public  Administration  and Management (IPAM), who was at the Banking and Finance Department  has met his Untimely death at Shell Old Road in the early hours of Saturday 8th July ,2018.

According to his mother, Isha Cole Koroma, who is a resident of 4 Lower Parsonage Street, Shell Old Road, told this medium that she got a call from the community police post that morning and informed her that her son was lying dead with multiple stabbings. She continued that she last spoke to her son (deceased) on Friday, 7th July at about 8pm.

She recalled when her son, who is now dead, telling her, “I am going out mum and I will come soon’’.

The mother also confirmed that her son was very much determined to become a great person in the society and that was the main reason why the late boy entered university at age 21.

Sarjah Cole, an Uncle to the deceased said that he always checks for the late boy to know whether he is inside before he locks the main door of the house; but on that faithfully day, he waited for him for the main door to be locked but he was nowhere to be found.

He also affirmed that the family members knew Alaphia had only one fiancée at the Parsonage community, Shell Old Road.

The family members are calling on Police especially the Kissy Police Station to expedite the investigation in order to know the circumstances leading to the death of their son.

When this reporter contacted the Crime Department of Kissy Police Barracks to confirm whether they have made some arrests, they declined making any comment on the issue because according to them, investigation is still going on.