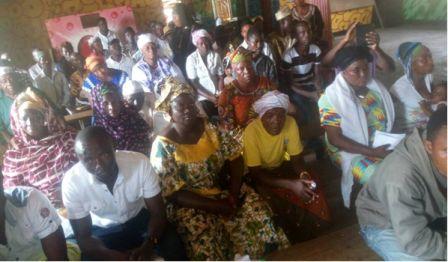 In a bid to keep the public informed about issues of corruption and the effects of the scourge on national development, the Anti-Corruption Commission on Saturday 19th May 2018 engaged the Rogbangba Community, Hastings, Western Rural District.  (Photo: Residents of Rogbanba Community during the ACC outreach meeting)

The ACC used the occasion to educate the community people on the role of the Commission in the fight against corruption as well as to solicit their support to act as whistle blowers.

Giving an overview of the meeting, Chairman of the programme and Public Education Officer ACC Junisa Sankoh said one of the reasons why the country is rated low in Transparency International Index is widespread bribery. Mr. Sankoh described bribery as a major hindrance to community development, noting that there are public services that are supposed to be free but people are forced to pay bribes to access them.

Delivering the welcome address the Headman of the Community, Sahid Kamara thanked ACC for such an engagement as this was the first time the Commission has visited them. He said the Community people will seize the opportunity to raise questions about the fight against corruption in the country and clarify issues that are commonly misunderstood.

The Councilor in the community, Edwin Koroma thanked the Commission for the initiative, and noted that the fight against corruption is pivotal to community development, urging the Commission to continue engaging different communities so that the public will understand the issues of corruption and how they affect their wellbeing.

Speaking on issues of bribery, Head of Outreach Unit, ACC, Abubakarr Turay gave a brief description of some of the acts that can constitute bribery. He said bribery is one of the issues affecting community development. He cited the education and health sectors which people commonly complain about; with particular reference to the free healthcare for lactating mothers, pregnant women and children under the age of five. He advised the audience to see it as a duty to report any act of bribery and corruption they witness in their community. He concluded by giving out the free hot lines including that for the Pay No Bribe campaign. He however cautioned the people against malicious complaints and reports that do not fall under the mandate of the Commission, such as marital issues.

The event was climaxed by a questions and answer session.