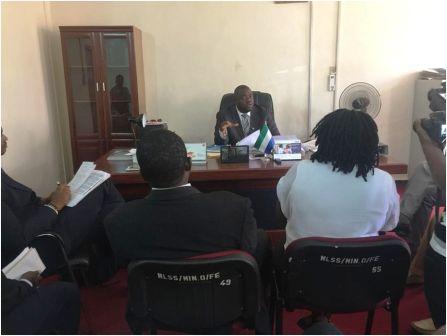 After a thorough mediation and dialogue in the matter between employees and Management of Shandong Steel on redundancy, one of the key outcomes highlighted by the Minister of Labour, Adekunle King in his report is that “Shandong Steel (hereinafter) referred to as company is willing to pay Senior Employees terminal benefit”. (Photo: Minister King addressing Aggrieved workers )

Addressing a meeting in his office on Tuesday that was attended by representatives of aggrieved Senior Workers, Minister King pointed out that his Ministry had listened to their complaint and counterclaims of the company. “We are a Labour Ministry trying to mediate, dialogue and massage the situation to prevent potential conflict that may generate into further problems,” he said, noting further that “I have the honour to refer the matter relating to the disagreement and concerns raised by Senior Employees of Shandong Steel regarding benefits calculations. I am to submit that the Ministry of Labour and Social Security has held series of reconciliation meetings in a bid to investigate the matter as instructed by Office of the President,” Minister King stated. He confirmed in his resolutions read in the meeting that his Ministry has “resolved that Shandong Steel must pay full terminal benefits and not 15% benefit for year’s accrued with African Minerals Limited as Article 13 provides ‘Continuation of employment of existing employees…’; Article 13(2) of contract of employees of senior officers clearly states : ‘in order to calculate your entitlements to terminal benefits it will be as per company policy’.  This therefore explains why we have agreed in principle that the senior officers be paid their terminal benefits as per their employment contract instead of the Collective Bargaining Agreement that caters for junior employees; and Senior Staff of Shandong Steel are however not entitled to be paid terminal benefits in accordance with Collective Bargaining Agreement which explicitly provides in the long title Terms and Conditions of Services for mine workers below supervision level.”

The Minister’s report has already been communicated to State House, the company and the aggrieved senior workers. “All we are doing is just mediation and none of us have been bribed as alleged,” the Minister clarified.

He further said those who feel they are not happy with the Ministry’s decision can make use of the courts to seek further justice.

Company officials say the Chinese have already raised the required funds to meet the aggrieved workers’ entitlements. Some Senior Workers who preferred anonymity informed journalists on Tuesday that they are not part of the aggrieved party and that they are only waiting for the company to start dishing out their benefits. Company sources have confirmed that it will start disbursing funds this week in accordance with its regulations and government’s resolutions as stated in the Labour Minister’s mediation report.

Peter Abraham Koroma who spoke on behalf of the aggrieved Senior Employees states that although the Ministry has done a very good job, they, however, suspect a twist in the matter. He accused Ministry of not looking into previous correspondences exchanged with the former minister and the Commissioner of Labour. Investigations continue.