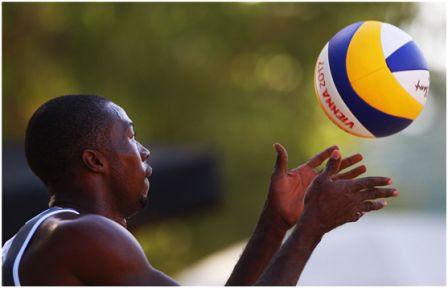 It was a fascinating performance at the Goolanganta Beach court on Monday afternoon where the young Sierra Leonean beach volleyball team edged passed their Sri Lanka opponents 2-0 (21-17, 22-20) in the ongoing Commonwealth Games in Australia.

The match was tough and important for the two sides as they wanted an all-out-win to progress to the next round of the competition.

Having lost their previous match against Canada, the Sierra Leonean duo, Abu Bakarr Kamara and Patrick Lombi once again proved that they are not in the Games to make up the numbers following remarkable improvement in key areas which include, attacking success, blocks and fast services.

Even though the Sri Lankans were defiant, the ambitious Sierra Leonean side were on top of situation and for several moments they kept their opponents at bay, turning the entire court topsy-turvy until the final end of the match. In a delightful mood after the match, Right Defender, Patrick Lombi stated: “It was a tough match, our opponents played well but we were more resolute. I am happy for the victory, a great moment for us and our country, definitely we will progress to the next round.”

Left Attacker, Abu Bakarr Kamara however admitted the presence of tougher and experienced opponents in the Games: “We must continue to improve game by game and ensure that we maintain our balance. This competition is huge with plenty at stake to achieve but with commitment and composure we shall make it.”

Sierra Leone’s tactician Sorie Kamara also admitted that their opponents were very tactical pointing out that it was a hard fought victory for his boys while attributing the win to hard work and committiment.

He stated that they lost the first match due to unconcealed errors which he disclosed have been fixed and went on to commend the organizers for making available a video recording of every match they played.

Coach Sorie maintained that there has been no injury worries ahead of the next fixture and with a perfect frame of mind they will make Sierra Leone proud by winning the trophy. According to him, they are not underdogs as they await the quarter final draw.