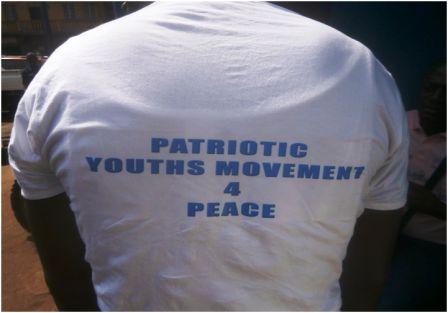 A youthful organization known as the Patriotic Youth Movement for Peace has embarked on a massive non-violent campaign in strategic places in Freetown and other parts of the country like Waterloo, Tombo and beyond ahead of March 7th 2018 general elections.

Displaying placards bearing various inscriptions, the President Patriotic Youth Movement for Peace, Fayia J. Gborie described his organization as a youth movement for peace with the motive of bringing Sierra Leoneans to understand and accept each other for harmony and unique relationship to exist.

He said over the years as youth of this nation, we have realized how our decision and indecision have impacted our lives especially during the political atmospheres in the country which could sometimes lead to innocent citizens He called on young people not to be brainwashed by some unpatriotic political activists and emphasized that our parents and elders are deeply concerned about the future of their children taking in to account the growing trend of peer influence that may lead to misguided philosophies of regime change or continuity of Government.

Mr. Gborie pointed out that because of these negative developments spanning electoral participations in Sierra Leone, our leaders are always grounded in celebrating mood rather than seek to wipe that which has divided us.

The President continued that whenever we approach this defining period in our democratic history, we see innocent citizens becoming nervous and anxious as to exactly the outcome of the process due to political participation, tribal segregation and discrimination, regional neglect and political affiliation.

According to Mr. Gborie, his organization has been set up to bring onboard traditional rulers, politicians, students, parietals, NGO’s and INGO’s as well as youth groups to grace this movement for stabilization of peace and development.

He concluded by appealing to various stakeholders in the political circle to help sensitize the youths using their influence and positions in society for the common good of the country.

After 3 years of staying away Sam...