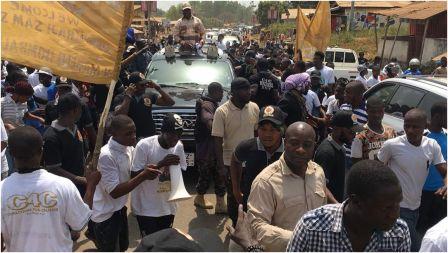 Former Vice President of Sierra Leone, now the Presidential Candidate of the Coalition for Change party (C4C) has finally return to his father land Kono district after three years of staying away out of the country fighting for constitutionality.

According to report thousands of people from all walks of life came out in their numbers to welcome their son whom they described as the Mandela of Sierra Leone fighting for the right of the ordinary men and women.

It could be recalled that in 2015 the former Vice President was unlawfully removed from office after refusing to support President Ernest Bai Koroma in his quest for a third term bid which many political pundits described as unconstitutional.

Addressing thousands of supporters at Konomanyi Park in new Koidu Sengbehun city Kono District Chief Sam Sumana thanked the people of Kono for their support and love they show to him throughout his tenure as Vice President of Sierra Leone adding that the time has come for Kono District to produce a President that will serve the interest of all Sierra Leoneans.

According to the former Vice President he described his former boss President Ernest Bai Koroma of violating the 1991 constitution and promoting the act of dictatorship adding what the President did to remove him as the tendency to bring chaos and anarchy in Sierra Leone but said as an ambassador of peace he decided to let go everything so that the people of Sierra Leone would enjoy the peace they fought for.

He said during his time as Vice President of Sierra Leone he involved in many developmental projects in Kono District but because of the situation he was subjected to at that time he never came out to explain to the people of what he has been doing affirming that President Koroma is dictator who does not want other people to grow.

He thanked the people of Kono District for their support they gave him for voting in the 2007 and 2012 general elections respectively as without their support the APC could not have been where they are today affirming that he decided to quit the APC because of massive corruption and bad governance President Koroma and his cohort are promoting.

Sam Sumana also accused President Koroma of violating the 1991 citing the decision he took to remove him from office was unconstitutional citing the ruling from the ECOWAS court and assured them that he will continue to fight until he remove President Koroma and his APC party from power.

Obasanjo distances himself from th...