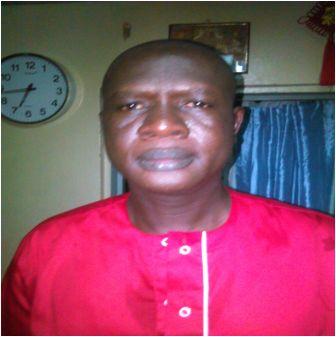 The people of Constituency 120 in the Central Kissy Area in the east of Freetown, on Sunday 10th. December, 2017, at the Borrow Pit in Moyiba, turned out in their thousands to show support and solidarity to Mr. Momoh Kamara (in photo) who is vying for Member of Parliament for the Constituency, under the All Peoples Congress (APC).

Welcoming the mammoth crowd, the Coordinator of Team Momoh Kamara for parliament, Mr. Alimamy Conteh, said he felt overjoyed with the massive support and solidarity that the people of the constituency have shown for Mr. Momoh Kamara.

Referring to him as a son of the soil, he disclosed that Mr. Momoh Kamara was born and bred in the Moyiba community and that he has lived and worked there all his life.

He further disclosed that Mr. Momoh Kamara is a community activist and social mobiliser who believes that education is the only way out of ignorance, neglect and poverty.

He also disclosed that Mr. Kamara has been a Teacher, a Head Teacher, a Principal and now Proprietor of two primary and one secondary schools all situated in the community to help in the education of the children.

He observed that the large turnout is a testament of the good works of Mr. Kamara whose popularity, he noted, is felt in the length and breadth of the constituency and even beyond.

Describing him as a highly educated man who has a Bachelor and Master Degrees as well as Certificates and Diplomas, Mr. Conteh stressed that Mr. Kamara will be the fittest man to adequately articulate the issues affecting the various communities of the constituency.

He called on the people to rally behind Mr. Momoh Kamara and gives him their fullest support so that he will be given the party symbol and elected to Parliament on 7 March, 2018.

Declaring his intention to run for Member of Parliament for Constituency 120, Mr. Momoh Kamara said as someone who was born and bred in the constituency he better understands the issues of the various communities and therefore in a better position to address them in collaboration with the people.

He reiterated that all throughout his life he has lived with his people and served them to the best of his knowledge, capacity and ability.

He stated that it is his desire to see that all the facilities that are being enjoyed by other constituencies in other parts of the country should also be enjoyed by the people in the various communities in his constituency.

He maintained that he is the only one who can best articulate these hopes and aspirations and therefore called ion the people to support to get the party symbol and then vote for him to become their Member of Parliament on 7 March, 2018.

Various speakers from different communities and community based organisations endorsed Mr. Momoh Kamara and vowed to campaign for him and vote for him on 7 March, 2018 to become their Member of Parliament.