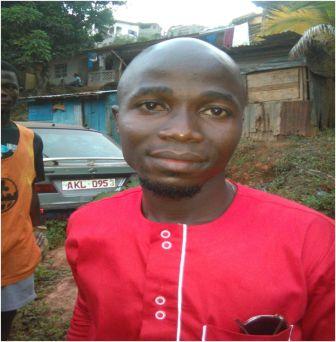 Mr. Abu Bakarr Sesay has told the people of Ward 419 in Constituency 120 in the Central Kissy Area in the east of Freetown that he was offering himself as their Chief Servant if they support him to get the party symbol of the All Peoples Congress (APC) and vote for his to become their Councilor in the Freetown City Council on 7 March, 2018.

He made this statement when he formally declared to run for Councilor for ward 419 at Borrow pit in the heart of Moyiba, in the heart of Kissy on Sunday, 10th. December, 2017.

Referring to the past representations of the Ward as wasted time not worthy of the task, he said he wanted to correct the mistakes of past Councilors of the Ward and bring development to the communities making up the Ward.
Presenting Mr. Abu Bakarr Sesay to the people of Ward 419 the Coordinator of Team Abu Bakarr Sesay for Councilor, Mr. Alimamy Conteh stated that Mr. Sesay is a very energetic, dedicated, serious, committed, innovative, development oriented, and respectful young man who has the drive and passion to serve his people.

He stressed that Mr. Sesay has proven his desire to serve his people by having being engaged in a lot of community self-help projects.

He appealed to the people to give him their fullest support so that he will be given the party symbol and then campaign for him and vote massively for him to become their Councilor on 7 March, 2018.

Various speakers from different communities and community based organisations endorsed Mr. Abu Bakarr Sesay and vowed to campaign for him and vote for him on 7 March, 2018 to become their Councilor.