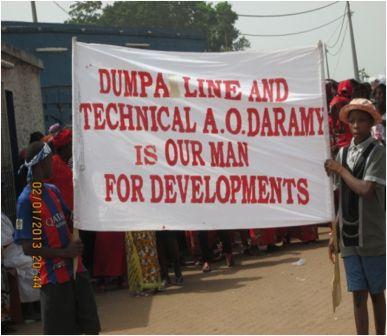 The electorate in Constituency 070, in Lunsar Town in the Port Loko District, has come out in large numbers demanding that Alhaji Anngar Oberani Daramy must represent them in Parliament under the All Peoples Congress (APC).

This was made public during the weekend when thousands of the ruling APC supporters were honoring the declaration ceremony of the said great man who has reportedly done a lot of good work for the entire district.

According to the erudite politician, he has served the said community as Member of Parliament for five consecutive years but since he gave up the seat, persistent pressure is being mounted on him by constituents to reassume the position for the fact that he has contributed immensely to the development of the constituency while he was Member of Parliament and even after he left the seat.

“Even the blind and other sets of people with disabilities are agitating for me to take over the hot seat come March 7th 2018,” said the would be Parliamentarian. Speaking to Sierra Express Media (SEM), several support groups claimed that they wanted Hon. Alhaji Anngar Oberani Daramy for the fact that he has proven to them love and passion for the development of the entire constituency.]

They said they are therefore calling on the Chairman and Leader of the APC, President Dr. Ernest Bai Koroma and other hierarchy to grant the man of the people as he described by electorate, the party symbol to contest in the election because they claimed that Hon. Alhaji Anngar Oberani Daramy is the fittest and sober minded man to represent them in Parliament.