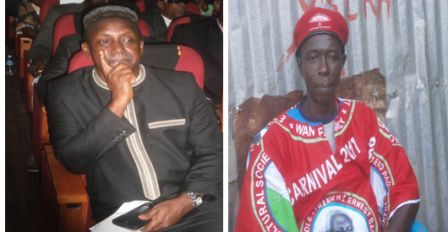 Aspirant for Ward 136, Constituency 62 formerly Constituency 41 in Samu Chiefdom, Kambia District, Momoh Mange Yillah has thrown challenge to the National Grand Coalition Presidential candidate, Kandeh Kolleh Yumkella (KKY) that as far as he and the chiefdom are concerned, the former UNIDO Boss who claimed to be a son from that part of the country is not going to win a single Parliamentary or Council seat in the said chiefdom. Photo:  NGC Leader, Dr.Kandeh Kolleh Yumkella (KKY) and Aspiring Councilor from Samu, Momoh Mange Yillah)

According to Momoh Mange Yillah who is aspiring under the All Peoples Congress (APC) ticket, indigenes in that remote area have no reason to vote for KKY as they alleged that his late father who was a Paramount Chief was a dictator and was apparently suppressing the will of the people.

He said in fact that was the reason one of the sons of KKY’s father lost the Paramount chieftaincy election contest because the late man evidently did little to foster love and unity among his subjects.

Mange stressed that he is ready to tell the story of KKY father’s misrule which made him to be less popular among his subordinates during his days.

He said above all, KKY never voted for any politician in the history of this country, “does he expect people to cast their ballot for him this time round?” the experienced politician queried adding that throughout the period he has been working for the United Nations, he did nothing for the people of Samu Chiefdom and the constituency as a whole.

However, Momoh Mange who aspired for the envious seat in 2012 but step down for the current councilor, Abdul Rahman Sesay bragged that he will be awarded the symbol because, he proffered that Sesay did not meet the expectation of the ward committee members as he works in isolation without interacting with the common people.

He also argued that the current Member of Parliament in that constituency, Henneh Radder who has also demonstrated interest to go for the symbol did little to transform the chiefdom or constituency as a whole throughout the wasted five years.

He therefore called on the Chairman and Leader of the APC, President Dr. Ernest Bai Koroma to award symbol this time round to committed politicians that are very much passionate for the development of his or her area of command and the people they governed.