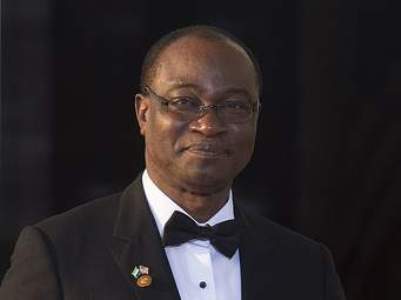 A stakeholder at the Magazine community, Hassan Kamara aka Samakarr and his group have pledged their unflinching support to the All Peoples Congress (APC) standard bearer, Dr. Samura Kamara (in photo) and his Running mate, Hon. Chernor Ramadan Maju Bah for successful 2018 March 7th 2018 Presidential and general  elections.

Samakarr as he is fondly called is also eyeing Ward 424 Council seat in Constituency 122 Magazine community in Freetown to transform the entire vicinity as a man that believes in investment.

He affirmed that the Magazine people played great role in the success of the APC because according to him in the 2012 election, they produced the largest vote and he congratulated the Chairman and Leader, President Koroma for appointing another season politician, Dr. Samura Kamara as the next standard bearer to continue protecting the President legacy.

He stated that he printed ten dozen of T-Shirts out of my own volition bearing inscriptions like “Hassan Samakarr support the success of Dr. Samura Kamara and Chericoco 2018”, because we don’t want the party to fall. He claimed that the whole country wants APC back to power because it appears to be the only political party that is developmentally oriented and capable of maintaining our long lasting peace.

Speaking on some of his recent achievement, Samakarr said he has seek security jobs for over twenty young people under the Samakarr Development Organization adding that he has a water producing company where many young people are surviving and he has bought a vehicle to help take any sick person to hospital on free of cost basis.

He warned all members of the Hassan Samakarr Foundation to be law abiding and stay off from violent during the East End Paddle masquerade so that innocent and peaceful citizens may not be disturbed.

He called on the APC hierarchies to award him symbol because he is popular and will galvanize large grassroots support for the party as he used to organize and support his group to always go in the street to rally in the name of the party and he spoke on the large farms the Samakarr Foundation cultivated at Masenessie village and other parts of the country. He concluded by bragging that positive transformation has taking place since his arrival in the Magazine community in terms of organizing cleaning programs, giving out scholarship and erecting tap borne water.