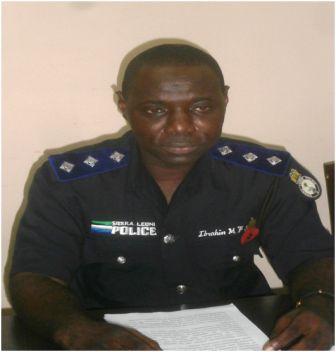 Police Media Boss, Assistant Superintendent of Police (ASP) Ibrahim Samura said though four suspects have been arrested over the brutal killing of the Sierra Leone Peoples Party (SLPP) supporters last Sunday but he quickly described the ugly incident as pathetic, inhuman and sorrowful in the sight of any peaceful and meaningful Sierra Leonean. (Photo: Police Media Boss, ASP Samura_

The media guru made the statement last Thursday at the usual weekly Government press briefing in the Conference Hall of the Ministry of Information and Communication, Youyi Building, Brookfields in Freetown.

He said Police is not there to politicize but rather to investigate offenders, criminals and individuals who commit offense adding that the four suspects are currently under custody helping the Police with their investigation.

He advised that it is the right of any politicians to place posters and banners in any point or centre across the country and cautioned politicians and their supporters to not paste any banner or poster in any private owned place with the consent of the owner.

Samura encouraged supporters to desist from preaching hate speech, perpetrating violence and the use of abusive languages for peaceful co-existent and assured the general public that the Sierra Leone Police is fully equipped and have procured vehicles to fast track the movement of Police during the election process so that robust security program could be enhanced.