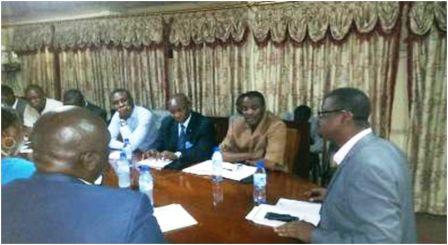 The Deputy Commissioner of the Anti-Corruption Commission (ACC), Shollay Davies has engaged major stakeholders involved in response activities of the August 14th mudslide and flash flood. The engagement was organized by ACC’s Disaster Response Transparency Initiative (DRTI), the Task Force set up by the Commission to monitor the response activities of the recent disasters. The meeting attracted stakeholders from the ONS, WFP, ICRC, Street Child, NaCSA, Action Aid, etc. (Photo: The engagement in progress)

Stating the purpose of the engagement, the Deputy Commissioner intimated stakeholders that the ACC was not re-inventing the wheel when it decided to set up the DRTI. The veteran anti-graft fighter who had worked in several Departments of the ACC before appointed Deputy Commissioner expressed the Commission’s awareness of the opportunities of corruption created by emergency situations such as the August 14 disasters. Mr. Davies noted that the major reason for the Commission’s intervention is to prevent corruption, ensure accountability and transparency and monitor the activities of response organizations to the disasters. He recounted the unfortunate happenings during the Ebola response and registered the Commission’s determination to prevent the re-occurrence of that situation. The Deputy Commissioner pointed out that the ONS has been very cooperative with the work of the DRTI and therefore urged other stakeholders to do likewise. He encouraged them to fully integrate anti-corruption measures in their operations in order to ensure a corrupt free response.

In his statement, National Security Coordinator (NSCoord)-Office of National Security, Ismail T. Tarawali commended the ACC for its intervention and for complementing the efforts of the ONS. He apprised the ACC and other stakeholders that despite a few challenges, the Agency has been coordinating the response effectively and efficiently. He praised the efforts of Governmental and Non-governmental organizations on their support and donations to the response. The NSCoord. however noted that the major challenge in the process now is the few inconsistencies in the registration list and donations made by other organizations without the full knowledge of the ONS. He also mentioned that, a fiduciary was established by the ONS to ensure efficiency in the process.

Valuable contributions were made from other members present. It was resolved that, all of the stakeholders must put hands on deck to ensure a clean list of affected people, maximize collaboration as the response continues and engagements with the ACC as the DRTI continues to monitor response activities.