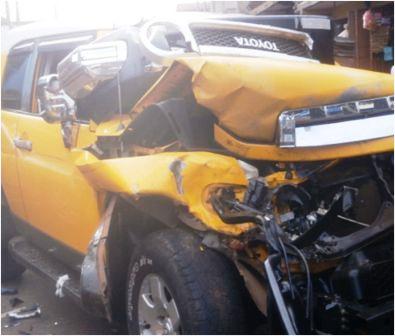 Speaking to Police Officers at the very scene where the expensive vehicle was shattered explained that it was SIK’s driver that allegedly caused the unforeseen circumstance because the overloaded Bedford with piles of woods bearing registration number AAS 799 was before driver in the Jeep when his vehicle suddenly hit the loaded Bedford and damaged beyond restoration. The Police further disclosed that no causality took place in both vehicles but SIK’s van damaged was beyond repair as a result of reckless driving.

According to witness Mammie Kumba who also identified herself as the wife of SIK, said the Driver of the vehicle has been warned not to move out with the vehicle on that particular night but to station it at Wellington Barracks adding that because the Driver failed to take advice, he went ahead and dented the luxurious vehicle and exposed his life to danger during the sudden crash.

The most amazing thing among onlookerrs was that, nothing happens to the overloaded heavyweight Bedford but the thousand dollar Jeep under Police Supervision was ruined.

Of Kortor-Kamara, the courtroom an...