Homepages
Your trusted place for Sierra Leone and global news
Trending News
HomeFeaturedOf Kortor-Kamara, the courtroom and mortuary on August 14

Of Kortor-Kamara, the courtroom and mortuary on August 14 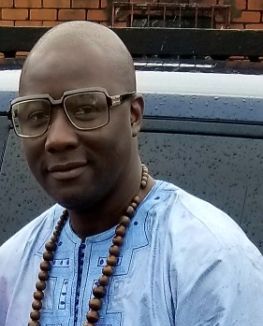 Of Kortor-Kamara, the courtroom and mortuary on August 14

Though not giant-sized in frame, he wears several hats. As Master and Registrar of the Fast-track Commercial Court, Deputy Master and Registrar at the Sierra Leone Judiciary. Also, he is a lecturer at the law department on Fourah Bay College. A normal week day for him begins at 5:00am.  (Photo: Osman Benk Sankoh, author)

His thought processes would start working on how to prepare to deal with signing motions; court orders; writs of sermons; how to ensure that the Judges adequately prepare for their cases; sometimes, he supervises projects in addition to preparing lecture notes for either of his International Humanitarian Law, Public International Law or Electoral Management Law classes.
August 14, 2017 was no different. Lansana Kortor-Kamara, like the previous two days, woke up to the sound of heavy rains. He quickly assembled his dark suit to match his shoes and necktie for the day. With a light breakfast, he hopped into his car hoping to be at his Lightfoot Boston Street – Government Wharf office by 7:30 a.m. Behold! Little did he realize that a major tragedy was happening. Mount Sugar Loaf had melted and with it came devastating consequences. The ripple effects were felt as far away as Kaningo, an area between Lumley Bridge and Juba towards the west end of Freetown.
At King Tom Bridge area, he noticed an unfamiliar spectacle of ambulances with the sounds of siren giving chase. Ebola quickly came to mind. He was confused. Then, with his car radio on, he tuned in to Skyy Radio where he heard callers repeatedly phoning in to say the rain had caused trouble on top of one of the hills overlooking the city. Many people had died, houses had caved in and help was urgently needed. He also heard that his usual route to his office, Kroo Town Road and Siaka Stevens Streets, were heavily flooded and vehicles were discouraged from using those routes. He chose Kroo Bay road. Passing through the Connaught Mortuary, he noticed probably fifteen to twenty corpses left unattended. There was that visible confusion in the area and little manpower to take care of the dead. The Connaught Mortuary, including its only government consultant pathologist, is normally a team of five persons and you could sense that they would not be able to cope with the calamity that was ensuing.
Kotor-Kamara rushed to his office, quickly organized his day’s routine, assembled his staff, told them his plans for the day, took off his suit, flung his neck-tie somewhere, folded his sleeves and off he ran to the Connaught Mortuary to volunteer.
Now, almost a month to that fateful day, I met Kotor-Kamara at his office. I wanted to know what gave him the urge to volunteer at the mortuary when he could have easily gone to his office and continue with business as usual. How does a trained lawyer end up washing up dead bodies in a humanitarian disaster? Why would anyone, be rushing to the mortuary after a mudslide to help arrange corpses? Why would a lawyer with a comfortable white collar job be running towards the Connaught mortuary when most people will be trying to stay as far away as possible when it’s overflowing with potentially infected corpses?
Paikun, as he was fondly called in college, is no stranger to volunteerism. In the early 2000s, during a cholera outbreak, he dedicated his time and energy to help save lives. In 2014/2015 when Ebola struck, Kotor-Kamara was also on the frontline mobilizing young men and women to contain the outbreak. In Koinadugu District, where he hails from, he is also part of a team – his compatriots – that hopes to plant one million trees in the next five years in the district as a way to prevent deforestation. This year alone, 30,000 trees have already been planted, he said. On that fateful day, when he passed through Connaught and after noticing dead bodies lying all over the place, Kotor-Kamara realized that the mortuary was overwhelmed. He saw that their staff was not properly coordinated. There were no body-bags and the few staff at hand were not wearing PPEs personal protective equipment. Again, Ebola raced through his mind. He met the pathologist, Dr Owiss Koroma, and asked what the contingency plan was as dead bodies poured in.
Respectfully, the pathologist, a retired but very pleasant practitioner on government contract, told him that he was simply overwhelmed. He had very few PPEs and body bags at hand and, clearly, he was not prepared for what was developing in front of him.
Kotor-Kamara quickly traded off his training as a lawyer for a mobilizer. He got the youth that were standing around to come and help. He called nurses on duty to assist with the wounded. He contacted the Sierra Leone Red Cross and Fire Force to also assist. After asking the youth whether or not they had Ebola training experience, he organized them into three groups. One was responsible for the cleaning of the dead bodies, the other joined the drivers in the ambulances for pick-up while the another team remained on ground to help off-loading the deceased. For three days in a row Kotor- Kamara volunteered effortlessly at Connaught, the country’s largest hospital in Freetown, the capital city. He recruited 210 volunteers and provided them with food from his own pocket. He could not sleep at night. He saw kids as young as one year or below dead. He saw mutilated bodies of young men and women, the young and old. He had nightmares.
Asked if he thought people had learnt any lesson as a nation regarding such calamity, he shook his head in the negative and said: “We have not learnt our lessons. We do not believe in being proactive. If it happens now, it will be worse.”
For his recommendations, he wants a Swift-Response Team to be set up with names of volunteers placed on a database and ready to deploy immediately whenever there is a national calamity of such magnitude. Every year, members of the team should be trained on disaster response including rescue and handling corpses. He also wants the country to invest money in procuring equipment for rescue and he believes strongly that both the Army and the Police should have specialized units for rescue and recovery. For persons already affected by the disaster, Lansana wants them to be voluntarily relocated and for those that would want to resist, as a lawyer, he said he would advise for a legislation that would entail compulsory relocation.
What are his fears? He did not mince his words. “Tsunami is the next disaster waiting to happen,” he said with a stern face and his warning is for government to relocate people from shallow coastal areas and in quick succession, he named Kroo Bay, Banana Water, Crab Tong, Funkia, Soso Town on Aberdeen as such areas.
Lansana Kortor-Kamara, the lawyer-turned volunteer, has said his bit. At a time when the country needed people to stand up to the plate, he did so effortlessly and mostly, with his own resources.
If history is to be recorded accurately, even as a footnote, there must be a line, a sentence, a paragraph, a chapter or even a whole book that catalogues the selfless sacrifice of Lansana Kotor-Kamara on August 14, 2017 at the Connaught Mortuary. Sierra Leone still has quite a few exceptional young men and women. Kotor is one of them and for this; I doff my hat to him.
by Osman Benk Sankoh
Disclaimer: Osman Benk Sankoh, a former journalist with Concord Times, now works with the United Nations. Sentiments expressed in this piece are his and do not necessarily reflect those of the organization he works with.
Stay with Sierra Express Media, for your trusted place in news!

Is Decentralisation The Answer To...