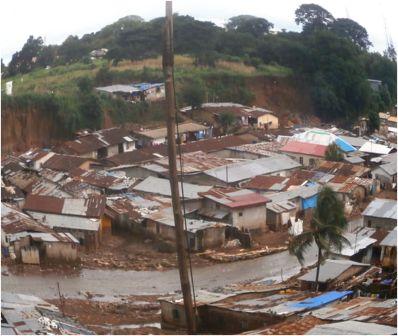 Although responsible authorities do not care  about the ugly situation at the Freetown filth depositing site, Bomeh as it has becomes a national concern because signs have started manifesting that the dumping site may explode and cause another manmade disaster at any time if early preventive method is not taken.  (Photo: Culvert community)

It is visible that Bomeh dumping site has overflown due to continuous dumping of waste products that messes culvert community which was considered as the hard hit area of the mudslide and flood on 14th August 2017 in various disaster prone areas in Freetown. Illegal inhabitants of the said place are presently worried about what they could do to avert disaster at Culvert community for the fact that there is no proper gutter been constructed that would run directly into the sea to prevent water from flowing together with rubbish to the sea.

The Culvert community at Race Cross and beyond needed immediate relocation to avoid a repeat of the last natural disaster. The Bomeh community is presently at risk because heavy rains are still pouring down. However, the public is worried about the future of Culvert indigenes for the fact that concerned authorities are still not demonstrating interest to put certain structures in place for the motive of averting future disasters.

What is doubtful among Sierra Leoneans is that, Freetown City Council (FCC) and Masada are still struggling to overcome the situation with old caterpillar machines and other equipment which they supposed to have used to reduce filth at Bomeh which is posing serious life threat.

Despite this entire threatening situation, people still develop confidence to live in those disaster prone areas especially at Bomeh where the Akram Bridge has already blocked preventing water from passing through.

In that regard, Sierra Express Media has joined the entire public to call on Government and other lined bodies to fast track the issue of relocating slum communities to safer environments.