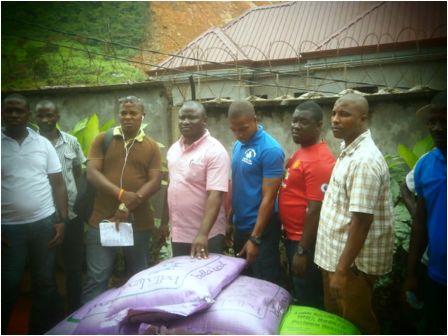 Water Packaging Union has on Saturday, August 19th 2017 donated thirty seven (37) bags of rice and one thousand bundles of water to the disaster response volunteers at the Regent village in Freetown.

Handing over the donation, the Public Relations Officer, Water Packaging Union, Max Michael described the donation as part of their Corporate Social Responsibility (CSR) adding that they thought it wise to extended such a gesture to victims of the disaster as Sierra Leoneans to play their own little role in responding to the ugly event which left over four hundred dead and thousands homeless.

He said they have been carried out such gestures on subsequent disasters since the formation of the union and mentioned that they have over one hundred and fifty member organizations. He called on Government to take action to prevent recurrence of such a natural disaster and he extended thankfulness over the swift intervention of international partners to provide relief to our father, mothers, aunts, uncles, sons and daughters.

Receiving the donation, Research Officer, Disaster Management in the Office of National Security (ONS), Mustapha Barrie described the situation as very bad for us as a nation and he extended appreciation to the Water Packaging Union for crying together with victims of the most perilous natural disaster ever in the history of our country. He assured union members that the donated items will be given to intended beneficiaries.